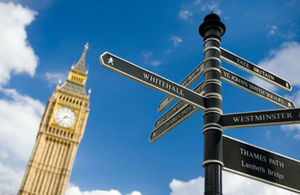 “When the Government Legal Department (GLD) introduced commercial training contracts in 2019, I was instantly drawn to the scheme, which offered an appealing mix of commercial and public law. Having been a paralegal in a charity, I already had an interest in advising an organisation with wider legal considerations than a conventional private sector business. As such, GLD’s commercial training contract aligned with my interests and seemed like a great opportunity to learn about new areas of law, such as public procurement and subsidy control.

As a legal trainee on the Department for Transport (DfT) commercial training contract I completed seats in the rail passenger services team and aviation team within DfT Legal Advisers, the Commercial Law Group’s litigation team and also undertook a secondment at one of the Rail Legal Services panel firms (in its infrastructure, projects and energy team).

The breadth of experience on offer was immediately apparent. In the commercial litigation team, I was involved with commercial disputes for a number of government departments and agencies, including procurement disputes, contractual claims and judicial reviews, which provided the opportunity to assist with drafting court filings and preparation for alternative dispute resolution (ADR) processes. Perhaps most interesting was having first-hand experience of the impact of the pandemic on the type and nature of work.

My seat in DfT Legal Advisers’ aviation team provided the opportunity to develop public law advisory skills. This included regularly advising on vires and proposed courses of actions, including the interpretation of and powers to amend retained EU law, assisting with drafting secondary legislation and supporting the provision of financial support to the industry as a result of the pandemic.

A unique feature of the GLD commercial training contracts is the opportunity to undertake a seat on secondment at a private practice firm. As well as gaining experience in interesting new areas such as renewable energy, this seat provided an insight into the concerns of private-sector stakeholders involved in public projects. It also provided the opportunity to develop effective transaction management and drafting skills which are undoubtedly valuable for a government commercial lawyer.

For my first posting on the 2+2 Scheme (the scheme whereby lawyers are allocated to two, two-year postings in GLD over the four years following qualification), I am delighted to have returned to DfT Legal Advisers’ rail passenger services team which advises on a broad range of commercial work arising from the relationship between the government and private-sector stakeholders in the rail industry, including high value rail procurements. Legal advice regularly focuses on the commercial arrangements for rail franchises in England which have evolved considerably in recent years in response to the pandemic and the intention to transition to implementation of the recommendations of the White Paper (Great British Railways: The Williams-Shapps Plan for Rail).”