Appointment of the new Chief of the Secret Intelligence Service (MI6) 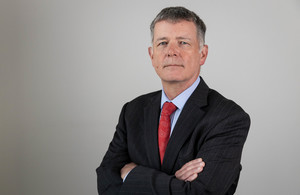 The Foreign Secretary, with the agreement of the Prime Minister, has approved the appointment of Richard Moore CMG as the new Chief of the Secret Intelligence Service (MI6). Richard will succeed Sir Alex Younger, who will leave the Service in the autumn.

Richard is currently Political Director in the Foreign and Commonwealth Office, and a former HM Ambassador to Turkey. Richard previously held director roles in the Secret Intelligence Service and has been Deputy National Security Adviser in the Cabinet Office.

"I am delighted to appoint Richard as the next Chief of the Secret Intelligence Service. He returns to SIS with tremendous experience and will oversee the work of a group of men and women whose tireless efforts are rarely seen in public, but which are critical for the security and prosperity of the UK.

"I pay tribute to Sir Alex Younger for everything he has done during his time leading the Secret Intelligence Service. He has carefully and effectively guided the service during a time of increased and more diverse threats."

"Richard’s experience and leadership in the Intelligence field will prove vital in pursuing national interests overseas and protecting the UK from emerging foreign threats. I’m confident Richard will be an excellent Chief, who will embody the values of the Service and act as a fine role model to SIS staff.

"I would also like to take this opportunity to thank Alex Younger for his excellent leadership of the Service over the last six years and his contribution to the protection of UK citizens from outside threats during that time."

"I am pleased and honoured to be asked to return to lead my Service. SIS plays a vital role - with MI5 and GCHQ - in keeping the British people safe and promoting UK interests overseas. I look forward to continuing that work alongside the brave and dedicated team at SIS."

"I am delighted by this appointment. Richard is a highly accomplished intelligence officer and we look forward to welcoming him back to the Service."

• Previously Richard served as British Ambassador to Turkey and has been Deputy National Security Adviser in the Cabinet Office.

• Prior to his time at the FCO, Richard joined SIS in 1987 where he undertook a range of roles across the Service both in the UK and overseas.

• Richard was born in Libya and is married to Maggie, with two children. Outside of work, Richard’s interests include playing golf and watching cricket and rugby. He speaks fluent Turkish.