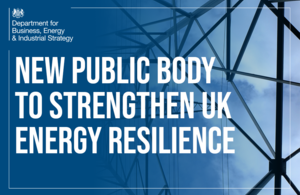 The government has today committed to delivering a new public body to strengthen the resilience of Great Britain’s energy system.

The Future System Operator (FSO), to be launched once legislation is passed and timelines have been discussed with key parties, will look at the Great Britain’s energy system as a whole, integrating existing networks with emerging technologies such as hydrogen.

The FSO will be a new public body founded on the existing capabilities of the Electricity System Operator (ESO), and, where appropriate, National Grid Gas (NGG). It will work with energy suppliers and networks to balance the UK’s electricity systems and ensure continued energy resilience and security of supply for households and businesses. It will also provide strategic oversight of the UK gas system by taking on longer-term planning in respect of gas (but not real-time operation, which will remain with NGG).

With high global wholesale gas prices and renewed pressure on energy networks following Russia’s illegal invasion of Ukraine, consumers are facing increased costs and there is an urgent need to safeguard and boost domestically produced energy.

Today’s announcement comes ahead of the forthcoming Energy Security Strategy to be published later this week which will set out our approach to ensuring greater clean energy independence for Britain. Government, Ofgem, National Grid and the ESO have agreed a joint statement published alongside this announcement, which sets out their shared vision for the FSO and their commitment to working together to deliver it.

"Russia’s appalling aggression in Ukraine amid escalating global gas prices has shown the vital importance of strategic change to the UK energy system. We need to boost our energy resilience, reduce our dependence on expensive imports and slash emissions. The FSO will do just that."

"A fully independent system operator will help to transform Great Britain’s energy system and cut customers’ energy bills. Critically, the FSO will ensure that we will build a smart, efficient and flexible system that will mean that Britain moves to a secure low carbon and low-cost system.

"We look forward to working with National Grid, government and the wider industry to implement this important change in the way the energy system is managed."

"We warmly welcome today’s announcement that the ESO will be at the heart of the system operator of the future. Building on our track record and skills as a world leading system operator, together with industry and government and regulators we will help deliver an affordable, reliable and clean transition for all.

"The ESO will continue working closely with all parties involved in the coming weeks and months to enable a smooth and successful transition."

"National Grid has a critical role to play in the decarbonisation of the economy to reach net zero, whilst continuing to ensure security of supply at the lowest cost to consumers. We have been working closely with government, industry and the regulator to create a Future System Operator that enables long-term holistic thinking, drives progress towards net zero, and lays the foundations for the regulatory reform necessary to deliver a clean, fair and affordable energy transition. We will continue to work closely with all relevant parties to ensure a smooth transition, subject to Parliamentary approval and conclusion of the transaction process."

The move aims to further build the resilience that energy providers and billpayers need. This will deliver greater energy security whilst ensuring the clean energy produced by the UK’s burgeoning renewables sector gets to the homes and businesses which need it across the country.

As a trusted and expert body at the centre of the gas and electricity systems, the FSO will take a significant role in shaping the energy system and facilitating competition, overseeing new projects and integrating them with existing energy supplies.

The announcement follows extensive consultation with the energy industry, where there was broad agreement that Great Britain needed a new public body with operational independence from government, to oversee developments across the UK’s energy networks.

The operator will take a whole-system approach to coordinating and planning the network, looking across electricity, gas and other emerging markets such as carbon capture, usage and storage, as well as offshore wind networks.

The FSO will also have a duty to provide independent advice and technical input to the government and industry regulator, Ofgem, to inform key strategic policy decisions.

The consultation responses, published today, also give Ofgem a new strategic function overseeing energy companies’ governance codes. This decision is expected to result in a long-term net benefit for industry and consumers, by ensuring that the detailed technical and commercial rules which guide energy providers keep pace with our net zero ambitions and deliver for UK consumers.