Patients will be able to return equipment, including crutches and wheelchairs, for reuse or donation to charity where possible 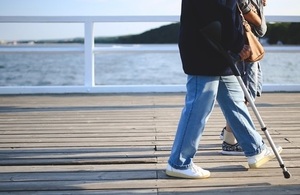 Minister of State for Health Steve Barclay has urged NHS staff to accept patients’ unwanted medical equipment and reuse it, where safe to do so.

The move is part of plans to reduce the NHS carbon footprint and put a stop to nearly-new crutches and wheelchairs being thrown away or left unused in homes, rather than reused or recycled.

This supports the long-term plan for the NHS by reinvesting savings into frontline care for patients and staff. The move also boosts efforts to promote a ‘greener NHS’ and help local charities.

Some hospitals already recycle equipment, using innovative approaches to ensure money spent on medical equipment is not wasted. These schemes include:

• Mid Essex Hospital Services NHS Trust – runs a scheme to reuse returned walking aids, such as frames and crutches. Returned items are examined, decontaminated and reused or recycled. Last year 21% of crutches and 61% of frames were returned. This saw over 2,000 pieces of equipment reused and generated savings of over £25,000

• Airedale NHS Foundation Trust – a project run by the trust and shared across local areas has seen over 800 wheelchairs recycled by the charities for use overseas, including in Eastern Europe, Africa, Asia and the Pacific

• University Hospitals Coventry and Warwickshire NHS Trust – a scheme to change the types of container it used for ‘sharps’, moving from disposable containers to long-span bins which last for 10 years, helping to save around £20,000 per year

"There are some great examples of hospitals already reusing vital medical equipment ‒ such as wheelchairs and walking aids ‒ and we want to see more of this across the country. In too many instances, however, medical equipment is being used once and then thrown away at a time when the public is increasingly aware of the impact of waste on the environment.

"Patients should be able to return the countless pairs of perfectly good crutches sitting unused in the corner of living rooms across the country and know they will be put to good use helping others, either in the NHS or elsewhere through charity donations.

"It is not only the kind of creativity and common sense the public wants to see from the NHS, but will also help ensure equipment is used in an environmentally friendly way and that taxpayers’ money is spent wisely – a crucial part of our long-term plan for the NHS."