Over 30 years of the Unduly Lenient Sentence scheme

The ULS scheme came into force on 1 February 1989 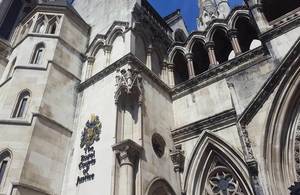 For over 30 years the Unduly Lenient Sentence (ULS) scheme has helped victims of crime get justice.

The scheme was launched in 1989 following public outcry over a series of controversial sentencing decisions, including the 1986 ‘Ealing vicarage rape’ case where 21-year-old Jill Saward was raped by burglars at her father’s vicarage.

The first ULS hearing took place in July 1989. In this case, a man who committed incest on his daughter had his sentence doubled from 3 to 6 years in prison. The scheme has since helped thousands of victims and their families get justice, and in an important hearing last year two of the UK’s most prolific rapists - Joseph McCann and Reynhard Sinaga - had their sentences increased by 10 years, meaning that both offenders should now serve at least 40 years in prison before they can be released.

In 2019 alone, 63 offenders had their sentences increased under the scheme – 16 of those were given custodial sentences after avoiding prison time at their original sentencing.

Since it launched, the scheme has been expanded 6 times and now includes a range of terror-related offences, all serious sexual offences, threats to kill, child cruelty, people trafficking and modern slavery, and many racially and religiously aggravated offences. Most recently, sexual offences involving an abuse of trust, indecent images offences and domestic abuse offences were added to the scheme.

"For over 30 years, the ULS scheme has helped victims of crime and their loved ones get justice. The scheme includes many more offences now than it did when it was first launched, allowing us to look at more sentences which don’t appear to fit the crime.

"In the vast majority of cases, judges get it right, but the scheme is important to ensure that certain cases can be reviewed where there may have been a gross error in the sentencing decision."

The ULS scheme allows prosecutors, victims of crime and members of the public to ask for certain Crown Court sentences to be reviewed by the Law Officers if they think the sentence is far too low. Some cases referred to the Court of Appeal can also offer guidance for future sentencing decisions.

Anyone can ask for a sentence to be reviewed if they think it is too low, and only one person needs to ask for it to be considered. Further requests do not lend any extra weight as the decision to refer a sentence as too low can only be based on the legal threshold. The Law Officers have 28 days from the date of sentencing to refer a case to the Court of Appeal, so it’s important for them to receive a referral as early as possible in order to properly consider a case.