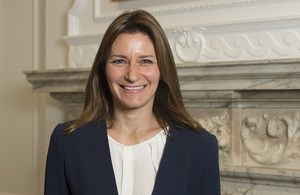 The Solicitor General also carries out a number of functions in the public interest, such as considering unduly lenient sentences, and taking action when there has been a contempt of court. These functions are carried out independently of their role as a Government minister.

“I am delighted to be appointed as Solicitor General for England and Wales. I look forward to working with the Attorney General to play my part in making law and politics work together at the heart of the UK constitution.

I want to thank my predecessor, Robert Buckland, for leaving me with such a strong record to build upon, especially in areas such as Public Legal Education, and the Unduly Lenient Sentence Scheme.

I am proud to be joining the Attorney General’s Office (AGO), a unique and historic government department which has the highest staff engagement score in central Government.”