Education Secretary sets out plans to prevent the most vulnerable children missing out on school, raising visibility of those who have needed a social worker 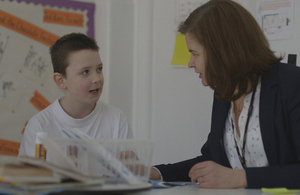 The schools admission code will be changed so that the most vulnerable children, such as those fleeing domestic abuse, can access a school place more quickly, Education Secretary Damian Hinds has announced today (17 June).

New analysis lays bare the extent of disadvantage, with every classroom having three children who have come into contact with a social worker and 1.6 million children needing a social worker at some point in the last three years. These children suffer further as they often miss out on education, being three times more likely to be persistently absent from school and four times more likely to be permanently excluded.

In a speech at Reform, the Education Secretary outlined the changing nature of disadvantage and a package of measures to support the most vulnerable in society, including new research on how to tackle persistent absence from school and exploring the expansion of advocates within education so that all children in need of a social worker, and not just those in care, are given the support they need.

Schools will also receive guidance on how to use the Pupil Premium most effectively, with evidence from the Education Endowment Foundation (EEF) showing the success of particular methods in improving educational outcomes.

"We understand children in care have very poor outcomes. Actually the truth is the outcomes for children in need of a social worker are almost as bad but there are five times as many of them.

"We also know the effects of this sustain. Overall if you’ve needed contact with a social worker at any time since year 5, on average you are going to score 20 grades lower across eight GCSEs.

"We need to improve the visibility of this group, both in schools and in the system as a whole. We need to make sure in every case that information is passed on to a social worker when a child moves school.

"We also need to improve our knowledge of what works to support and help these children. We must not lower our expectations for them – for these children it is more important that they can do their very best to make the most of their talents when they’re at school."

Included within the package of measures announced today are:

• Taking forward changes to the School Admissions Code and improving the speed of the in-year admissions process so vulnerable children can access a school place as quickly as possible;

• Making sure the mental health difficulties of children with social workers is tackled by ensuring both initial teacher training and the social work standards equip professionals with the right knowledge and skills on mental health. The Department for Education will bring together best practice on how to support children who have experienced childhood adversity, including the impact on mental health;

• Better sharing of information between councils and schools, including making sure social workers are informed when a child they support is excluded from school, and closer working between schools and councils to improve educational outcomes for disadvantaged pupils;

• Working across Government to tackle the causes of disadvantage, including on domestic abuse, drug and alcohol misuse, mental health, serious violence, and exploitation; and

• Making sure disadvantaged children are in education, by taking forward the Timpson Review recommendations and tackling off-rolling, absence and exclusions.

While the attainment gap between disadvantaged pupils and their peers has narrowed by at least 9.5% since 2011, disadvantage continues to lead to poorer outcomes that the Education Secretary today said need to be confronted head on.

"Giving every young person the best start in life, whatever their background and wherever they come from, is a mission that unites teachers. By acknowledging the relationship between family income and educational success, the Pupil Premium cuts right to the heart of the reason most of us became educators.

"The Pupil Premium is the key lever for closing the attainment gap and greater security of funding supports schools to plan ahead with confidence. We know that it has enabled headteachers to focus attention and make a difference for their most disadvantaged pupils. This is achieving results in schools across England, but there is undoubtedly more to do to.

"We’ve published new guidance to help schools spend their Pupil Premium to maximise the benefit for their students. Crucially, we want to strengthen the ways the Premium can be spent to recruit, retain and develop great teachers for all children."

"The Pupil Premium provides welcome additional funding for schools, recognising those with some of the biggest challenges. The EEF’s new guidance on how to spend it rightly emphasises recruiting, retaining and developing great teachers.

To further improve standards in schools the Government is targeting extra support at some of the poorest areas of the country, through its £72 million Opportunity Areas programme and £12 million Opportunity North East. Up to £26 million is also being invested in the National Schools Breakfast Programme, which will kick-start or improve breakfast clubs in over 1,700 schools.

The Department for Education is providing more support for early learning than ever before and has a new focus on the home learning environment, providing £3.5 billion this year alone in free early years education and the 30 hours free offer which already supports many families from lower incomes.