The environmental performance of regulated businesses across the country continues to improve, according to latest figures released from the Environment Agency (EA) today 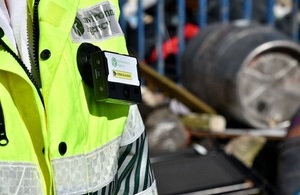 Every year, the regulator publishes its Regulating for People, the Environment and Growth (RPEG) report which sets out the regulatory performance of businesses holding environmental permits in England and the effectiveness of the EA’s regulatory approach.

The report shows that 93% of the 14,000 businesses the EA regulates demonstrated good compliance with their environmental permit conditions. Businesses which harmed the environment, however faced record penalties. A total of £25.5 million in fines were issued by the courts for environmental offences brought by the Agency compared to £8 million last year.

Waste crime continues to blight communities, cause environmental harm, and undercut legitimate business. The Environment Agency is closing more than two illegal waste sites every day but discovering a similar number of new illegal sites. The report acknowledges waste crime is becoming more organised and that more needs to be done. This will be addressed in the government’s forthcoming organised waste crime review, which has examined how the Environment Agency, partners, and the law enforcement system can best tackle the problem.

The report also highlights the increased use of Enforcement Undertakings for less serious environmental incidents. In 2017/18 there were a record £2.2 million worth of Enforcement Undertakings accepted by the Agency. By companies admitting liability and making a financial contribution to put right the harm they have caused, both the environment and communities benefit.

Other key findings include:

• 812 illegal waste sites were shutdown in 2017/18; more than 2 a day.
• Serious pollution incidents fell to 419, down 18% compared to 2016.
• The number of persistently poorly managed sites reduced by 18% compared to 2016.
• Environmental charities, organisations and projects received almost £2.2 million, compared to £0.9 million in 2016, in Enforcement Undertakings.

"Our regulation is supporting a healthier environment and safer communities – serious pollution incidents fell by 18%. We closed down over 800 illegal waste sites, and the courts have imposed record levels of fines on companies for environmental offences.

"We are committed to supporting businesses to innovate and grow, in return, we expect that businesses take their responsibilities to protecting the environment seriously."

The report can be found here