More than £31 million of UK government funding, matched by more than £30 million of industry funding, for development of innovative floating offshore wind technologies 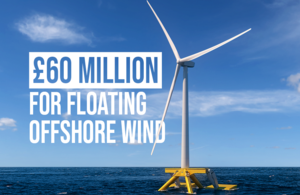 • More than £31 million in government funding to drive forward plans to place turbines in deep-sea areas, including in areas where winds are at their strongest

• research will help maintain UK’s position as a world leader in offshore wind, generating green energy investment in all parts of the UK and levelling up across the country

Floating offshore wind projects will receive more than £60 million in public and private investment to develop new technologies that will enable turbines to be located in the windiest parts around the UK’s coastline.

The UK government is today (Tuesday, 25 January) announcing 11 successful projects that will each be awarded up to £10 million as it puts forward £31.6 million to boost the amount of clean renewable energy generated in the country. In addition to this, industry will match the investment bringing the total to over £60 million – driving green energy investment and levelling up parts of the country including in Aberdeen, Swansea and Yorkshire.

The cash boost will further research and development in floating offshore wind with projects across the United Kingdom set to receive funding that will accelerate the deployment of turbines in seas around the UK. Research will focus on areas such as how turbines are moored to the seabed, undersea cabling and developing foundation solutions.

The UK is already home to the world’s largest deployment of offshore wind, however floating turbines, which can be deployed in deeper waters than conventional turbines, will boost energy capacity even further by allowing wind farms to be situated in new areas around the UK coastline where wind strengths are at their highest and most productive.

With global gas prices at record highs, the UK is determined to strengthen energy security further by deploying home-grown renewable technologies to reduce our dependency on volatile fossil fuels.

"We are already a world leader in offshore wind and floating technology is key to unlocking the full potential of the seas around Britain.

"These innovative projects will help us expand renewable energy further and faster across the UK and help to reduce our exposure volatile global gas prices."

By stimulating development now through the Floating Offshore Wind Demonstration Programme, the costs of building and locating floating turbines in deep-water areas will come down faster, growing the UK supply chain and supporting the target in the Prime Minister’s Ten Point Plan of delivering 1GW of energy through floating offshore wind by 2030.

One such project receiving more than £9.6 million is a collaborative scheme with bases in Edinburgh, Belfast, London and Doncaster, developing and demonstrating new technologies for mooring floating turbines to the seabed, cable protection, a floating turbine base design and an advanced digital monitoring system.

Another project with bases in Cambridge, Feltham, Aberdeen and Blyth, will get £10 million for bringing forward a compact floating turbine foundation and anchors that will likely enable a 2MW, or larger, turbine to be demonstrated in UK waters.

Today’s announcement follows support for floating offshore wind in the fourth allocation round of the Contracts for Difference scheme – the government’s flagship renewable energy auction scheme - where £24 million a year has been ringfenced for this emerging technology. It also follows the announcement by the Prime Minister in October for £160 million funding to develop and build new large-scale floating offshore wind ports and factories in the UK.

"I am delighted that the Floating Offshore Wind Demonstration Programme will support new projects in key areas of research and innovation for the ORE sector.

"The new projects are well aligned with the Research Landscape of the Supergen ORE Hub and demonstrate the great benefit to the sector of academics and industry experts working closely together – utilising their combined knowledge and expertise – to advance the UK’s Net Zero Strategy."