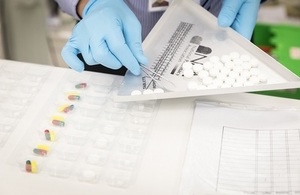 The announcement was made at the Call to Action on AMR summit in Ghana.

The UK government is co-hosting the Call to Action on AMR event with the governments of Ghana and Thailand, Wellcome Trust, World Bank and the UN Foundation.

The 2-day event celebrates innovative AMR initiatives from around the world and urges the international community to work together to slow the spread of AMR.

The UK is being represented at the summit by the Chief Medical Officer for England, Professor Dame Sally Davies. It will announce a number of commitments at the summit, including:

• £9 million to the Foundation for Innovative New Diagnostics (FIND)
• £5 million to fund the development of new ways to diagnose and tackle drug-resistant ‘super gonorrhoea’
• £3 million from the Department for International Development to fund an accelerator which will find new ways to diagnose AMR and ensure antibiotics are being used appropriately
• £1 million to evaluate technologies to detect poor quality and fake medicines that pose a risk to public health
• £1.5 million funding for a fellowship programme in developing countries to build capacity for calculating and mitigating the economic cost of AMR
• £1 million to an International Reference Centre providing practical support to developing countries to improve their ability to collect data on AMR to better tackle it across human health, animal health, agriculture and the environment

AMR is a global issue due to the ease and speed with which drug-resistant infections can spread across countries.

The government is also developing a new longer-term vision where AMR will be contained and controlled by 2040. This will be published in the new year and supported by a new 5-year national action plan across human and animal health, the food chain, agriculture and the environment.

"Antimicrobial resistance threatens the future of modern medicine and global food security, placing millions of lives across the world in danger.

"The UK is committed to tackling AMR, both at home and internationally, through a variety of concrete actions. There is no single solution, it will take time and commitment from all sectors but working together as a global community we will mitigate this threat."