A new set of planning rules should be produced for sites with more than 1,500 homes to speed up property building, a major review has said 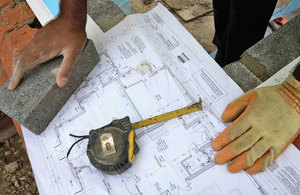 Sir Oliver Letwin’s report said new rules would require developers to build a wider range of properties with different designs and tenures, to speed up build out rates.

In his interim report, he said he could not find “any evidence” that major developers are “holding land as a purely speculative activity” – and their business models instead rely on selling houses.

Instead, having too many identical properties on large sites – and the limits on how quickly these can be sold – is the fundamental reason behind the slow build out rate.

The government will now consider the report into the build out rate of large sites before deciding on next steps.

Last year over 217,000 new homes were delivered – the highest number on all but one of the last 30 years. Sir Oliver recommends that by adopting the measures in his report it will help government towards their target of delivering 300,000 homes a year.

In his final report, he calls for:

• new planning rules which require homebuilders to offer a range of different types of properties on big sites, so they can be completed more quickly without “flooding” the market with a large number of identical properties

• a new National Expert Committee to be set up to advise councils on the different types of properties that should be offered on large sites; they would also handle appeals where there is a dispute between developers and local authorities

• councils to be given a more muscular role in guiding major homebuilding projects – and the power to purchase undeveloped land for 10 times its existing use value; this would make it viable for more affordable housing to be built

"I found that the main reason developers are slow to complete building on large sites is that there is only a limited demand each year for the highly uniform properties they are building on those sites.

"My final report sets out some policy levers that government can use to increase the variety of homes on sites, so they can be built out more quickly."

A full response to other aspects of the report will be made next year.

"There is no mission more urgent than making our housing market work, and building the homes our country needs.

"Sir Oliver has found that it takes 15 years to complete building on some of the largest sites, which is far too long.

"It is clear action is needed so developers work with us as partners to deliver 300,000 properties a year by the mid 2020s. We will consider the recommendations in Sir Oliver’s report to determine next steps to ensure we build the homes our country needs."

The government’s planning rulebook already encourages housing developments to have a mix of property types, and councils are encouraged to divide up large sites to speed up the delivery of homes.

Sir Oliver recommends the government goes further and adopts a new set of planning rules for large sites. This would require developers to offer a range of property types.

The changes could be brought in quickly through a written ministerial statement and secondary legislation, before a change to the law goes through Parliament.

A national expert committee would arbitrate where councils dispute whether developers are offering the right range of properties. They would also be able to offer expert advice, and councils would be expected to consult the committee before approving any large site application in an area of high housing demand.

Councils should be given the power to designate particular sites as ones which can only be developed as “large sites” – so developers have to follow the new planning rules.

Sir Oliver says the result of his recommendations for more diversity will mean landowners receiving less for their land.

Sir Oliver recommends that developers are given financial incentives to offer a range of property types quickly.

He suggests there are conditions put on government funding for house developers or purchasers, if they do not voluntarily follow the new planning rules after 2021.

Once master plans have been produced, the developer may choose to sell off all or part of the site to developers.