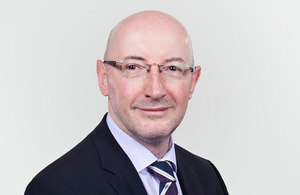 "I am pleased to announce the appointment of Jim Harra as Second Permanent Secretary at HMRC. He has done an excellent job in his dual roles of Tax Assurance Commissioner and Director General for Customer Strategy and Tax Design in HMRC. He brings with him a wealth of relevant experience and I look forward to working with him as he takes up his new role.

"I would also like to thank Edward Troup for his tremendous public service over the last 13 years as he stands down next month from his role as Chair of HMRC."

"I am delighted that Jim has taken up this post in HMRC. There are some enormous and important challenges ahead for HMRC: our transformation programme to make us a world class, digital-first tax authority; our focus on supporting the honest majority and clamping down on the dishonest minority; and our work to rise to the challenges of exiting the EU – particularly on customs and the border.

"Jim knows HMRC and its customers well and will bring his usual dedication, knowledge and professionalism to the role. I look forward to working with him to tackle these challenges."

"I very much look forward to becoming HMRC’s new Second Permanent Secretary. The work we are doing in the department, to create a tax system that makes it easier for taxpayers ‎to get things right, and to prepare for the UK leaving the EU, is vitally important and touches every life in the country. I am proud to have been given the opportunity to help lead this important work."

This appointment has been formally ratified by the Prime Minister, and is the result of a recruitment exercise across Whitehall. Jim will take up his new post on 1 January 2018.