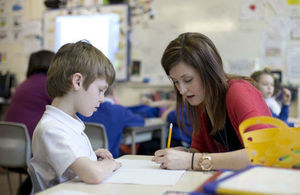 These figures mean that the Government is on track to deliver an extra one million school places nationwide in the decade to 2020 - and reverses a reduction of 100,000 school places between 2004 and 2010.

At the same time, school standards have risen, with 85% of schools now judged good or outstanding – up from 68% in 2010, giving parents more choice of a good school place.

"Children only get one chance at an education and they deserve the best, wherever they live and whatever their background.

"That’s why this Government is undertaking the biggest expansion in school places in two generations – and the statistics out today show we are well on track to create one million places this decade.

"With standards rising in our schools this will mean that more families have the choice of a good school place."

Many of the places have been created in the academies and free schools that now educate more than 50% of children in state-funded schools in England – with standards rising faster in many sponsored academies than in similar council-run schools.

Since 2010 the Government has led a dedicated programme to provide additional good school places with the creation of new free schools and expanding existing school sites.

Most recently the Department for Education announced 37 special free schools and two alternative provision free schools, in addition to over 400 free schools already open and more than 250 due to open in the coming years.