What will the future of transport look like? Government seeks views on how digital innovation can help people to plan, book and pay for travel 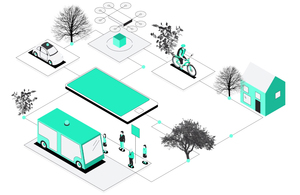 Drone deliveries and digital mapping for easy-to-access walking and cycling routes could soon be a reality for people living in rural areas across the UK, following the launch of a call for evidence to help develop the government’s Future of Transport: rural strategy.

The Future of Transport: rural strategy – call for evidence, launched today (24 November 2020) by Transport Minister Rachel Maclean, looks at how the benefits of transport innovation can be enjoyed by everyone, including those living and working in rural areas.

Speaking at the Financial Times’ Future of Mobility conference, the Minister is challenging business and transport groups to help revolutionise travel in the UK’s towns, villages and hard-to-reach areas, making it easier for people to access jobs, education or healthcare.

The call for evidence will examine how to bring services and communities into the 21st century by improving transport reliability and connectivity in people’s everyday lives.

"This call for evidence will give us a unique opportunity to harness the community spirit of rural areas to understand how innovation in transport can benefit the people and communities that need it most.

"Now more than ever, it is important that we use the power of transport to build back greener, and transform how people and goods move around the UK."

The distance between a person’s home and their nearest mass transport hub is often around 5 miles in rural areas, making it a major barrier to accessing public transport and services. The call for evidence looks at how linking different digital platforms together could create a more seamless experience for people, allowing them to plan, book and pay for travel all in one place, and to link journeys over multiple modes.

The call for evidence will also look at how the increased popularity of e-bikes, alongside digital-mapping technology and apps, could encourage more active travel in rural communities. This, along with better access to walking and cycling routes, could help open active routes that could otherwise go unknown.

Opportunities for drones to make deliveries in rural or isolated towns and areas are also being explored. Particularly suited to the greater distances in rural areas, drone deliveries could cut down delivery times and help to reduce pollution, allowing rural locations the potential to be a trailblazer for low-carbon deliveries.

Evidence will also be sought on how ‘micromobility’ transport methods – such as e-cargo bikes – could be integrated into rural transport networks, helping drive the changing face of rural economies and making home-based businesses more accessible to markets.

The feasibility of fully automated and passenger services operating in rural areas will also be examined, and small electric aircraft may be able to move goods and people efficiently, particularly in communities.

Today’s announcement comes as the Department for Transport also publishes its response to the Future of Transport regulatory review, which aims to create a more innovative and flexible regulatory framework that better meets the needs of both transport users and innovators.