The government has today set out the next steps in its £5 billion strategy to deliver next generation, gigabit-capable broadband to the entire country 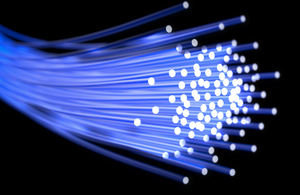 A consultation has been launched on the draft procurement strategy for the UK Gigabit Programme setting out plans to connect the first one million homes and businesses with gigabit speed broadband and maximise coverage in the hardest to reach 20% of the UK by 2025.

Gigabit-capable broadband connections offer the fastest and most reliable speeds available. They will pave the way for new and unexpected social benefits alongside jobs and economic growth over the coming decades, and revolutionise rural communities by giving people the freedom to live and work more flexibly. The strategy details a broad range of interventions to deliver gigabit broadband: contracts for a record £5 billion in public funding, broadband vouchers and other innovative solutions across all nations of the UK.

The accelerated approach to awarding contracts for the £5 billion will mean every telecoms provider - from the very small to very large - can take part.

"Today we’ve set out our bold programme of national infrastructure projects to future-proof the UK’s internet networks so we can build back better from coronavirus and create new jobs and economic opportunities.

"We will begin these procurements rapidly so broadband providers big and small can move quickly to get the job done and level up communities with this much faster, next generation broadband."

Planning for Gigabit Delivery in 2021 includes a series of maps of large and small areas covering the whole of England where government intervention and subsidy is likely to be required to deliver gigabit-capable networks. It also shows the areas expected to be delivered through normal commercial rollout.

The consultation anticipates up to 26 large regions of England that are most likely to attract commercial investment but require subsidy to reach the hardest 40,000 to 80,000 premises in each area. The government expects larger broadband suppliers, including challengers to incumbents, to bid for these areas and prioritise people with slow speeds.

In addition there will be smaller contracts to connect around 1,000 to 8,000 premises, to stimulate competition across a wider range of small, medium-sized and rural specialist telecoms providers and help them to scale up.

This could include areas of Cumbria, Westmoreland, Yorkshire, Devon, Somerset, Dorset, Herefordshire, Lincolnshire, Oxfordshire, Kent and Sussex, depending on where these providers wish to compete.

In Scotland, Northern Ireland and Wales, the R100, Project Stratum and Superfast Cymru projects respectively are rolling out large scale superfast contracts which will deliver gigabit connections over the coming years.

The UK Government will work closely with the Devolved Administrations in Scotland, Wales and Northern Ireland from early 2021 to develop plans to complement these contracts and extend gigabit coverage across the UK.

DCMS is also exploring how to make available a small number of contracts covering very large areas that are the least commercially attractive to build in. This would help make sure that no areas are left behind - even those where there is a limited prospect of competition.

As well as these supply side market interventions, the government is also seeking industry views on how to extend its successful Gigabit Broadband Voucher Scheme from April 2021. The scheme allows people in rural areas to request a gigabit connection with the government subsidising the installation costs. This would help broadband suppliers respond to increasing consumer demand for gigabit broadband while the new procurements get up and running.

The government will also continue its programme to connect public and community buildings - such as council houses, schools, libraries and GP surgeries - so they act as full fibre ‘hubs’ off which industry can build their networks and connect surrounding homes and businesses.

These new procurements for gigabit infrastructure are set to begin in Spring 2021. The government will now seek industry and local authority views on the strategy to define small and large procurement boundaries, as well as ensuring that priority areas are served.

The recent Spending Review set out the timeline for how the first tranche of £1.2bn of funding will be made available to industry over 4 years. The commitment to spend £5 billion stands, and the government will accelerate this investment if industry can demonstrate it has the capacity to deliver further and faster.