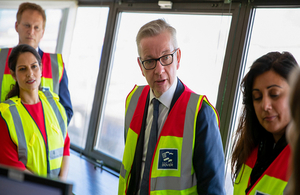 • Chancellor of the Duchy of Lancaster, Home Secretary and Transport Secretary visit port to see Brexit preparations
• Vital work will make sure freight continues to cross the channel smoothly

The Chancellor of the Duchy of Lancaster, Michael Gove, Home Secretary, Priti Patel, and Secretary of State for Transport, Grant Shapps, visited the port today (Aug 7).

During the visit, the Ministers met with representatives from the haulage, freight and port industries to discuss plans for October 31 and looked at the work being done to ensure the UK is ready to leave the EU. This includes vital work to make sure traffic continues to flow smoothly at both the port and the surrounding roads after Brexit.

They also met Border Force officers to talk about the steps they have already taken to maintain both security and the flow of goods and people at ports across the UK, including training more than 5,500 officers for Brexit.

"Making sure we are ready to leave the European Union on October 31 is my top priority. That is why we have stepped up our preparations across government.

As part of its preparations for the UK’s departure from the EU, the Border Force is currently recruiting up to 1,000 new officers to help maintain security and support flows at the border.

That is on top of a further 900 officers who were recruited in 2018/19 to prepare for Brexit. And across the Border Force, more than 5,500 officers have been trained to ensure the border runs smoothly after we leave.

"It is crucial that our borders continue to flow freely and remain secure after Brexit.

"That’s why Border Force is recruiting up to 1,000 new officers to keep our country safe and ensure that Britain continues to be a hub for international trade.

"The work being done by Border Force is vital to ensure that the UK border remains one of the safest and most efficient in the world."

As Europe’s busiest ferry port, the Port of Dover is used by 120 ferries and 90,000 passengers each day. It also handles more lorries than all other UK ports combined.

The Department for Transport has well-developed plans to make sure the area around the port keeps running effectively after October 31 and is working closely with key stakeholders across Kent, including the Kent Resilience Forum, to make sure key routes such as the M20 continue to run smoothly.

The department is also consulting on new powers for traffic officers to reduce congestion in and around ports and has set aside £300m to ensure vital medicines continue to enter the country after we leave the EU.

"The UK will be leaving the EU on October 31, and we will be prepared whatever the circumstances. From port infrastructure works to the people working within them, we have set aside millions of pounds so that goods and transport will continue to move in a no-deal scenario.

"This government is backing Britain, ensuring the country gets the support it needs to grow and grasp the golden opportunities in front of us as we leave the European Union."

As well as meeting business leaders and port officials during their visit, the Ministers also met representatives from local government to discuss measures being put in place to make sure the area is ready for October 31.