600 public buildings in Wales levelled up with full fibre broadband

More than 600 hospitals, police stations, libraries and other public buildings in Wales have been connected to lightning-fast full fibre broadband under a UK Government drive to level up public services and speed up rollout 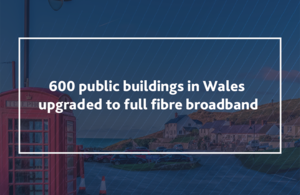 More than 600 hospitals, police stations, libraries and other public buildings in Wales have been connected to lightning-fast full fibre broadband under a UK Government drive to level up public services and speed up rollout.

It marks the completion of the largest public sector broadband project in Wales delivered funded by the UK government as part of it is levelling up strategy across the whole of the UK - making a tangible difference to the lives of families, people and communities across Wales.

All 620 buildings now have greatly improved and ultra-reliable connectivity to help improve the productivity and user experience of the public services they offer and, as their requirements increase in the future, they will be able to tap into speeds of more than a gigabit (1,000 megabits) per second.

It means doctors and police officers can save time waiting for large files such as x-rays and CCTV footage to download, care home residents will get better access to online therapy and entertainment, and library users will enjoy faster Wi-Fi for surfing the web.

The connections will also incentivise commercial broadband providers to deliver upgrades to surrounding homes and businesses in Wales by allowing them to extend the government-funded gigabit network, which is cheaper and quicker than having to build it from scratch.

"We’ve funded hundreds of faster broadband upgrades across Wales to put public services in the digital fast lane so they can deliver more for communities.

"This is on top of our £5 billion Project Gigabit which will bring better broadband to tens of thousands of rural homes and businesses across Wales and the UK that would otherwise be left behind.”

The high-speed connections are up and running in 166 public buildings across the Cardiff Capital Region, including in Cardiff, Newport, Bridgend, Caerphilly and Pontypool and more rural areas such as Hengoed, Treharris and Usk.

In North Wales 311 public buildings have been upgraded including in Colwyn Bay, Rhuddlan, Rhyl, Llandudno, Wrexham and smaller towns and villages like Betws-y-Coed and Cerrigydrudion.

Pembrokeshire has seen 68 public buildings upgraded, including in Haverfordwest, Milford Haven, Pembroke Dock and Tenby, and 75 sites in rural areas across Wales have also been switched on including near Welshpool, Bangor and St Davids.

The investment is just one way the UK government is improving connectivity in Wales. Last year ministers announced up to 234,000 rural premises in Wales could be in scope for a broadband upgrade via Project Gigabit: a £5 billion programme that is prioritising the most hard-to-reach areas for upgrades fast enough to support even the most data-intensive technologies such as 8k video streaming and virtual reality gaming.

"This is a significant step that will make so many people’s lives easier in Wales.

"Every day increasingly more public services are being delivered online. The investment of £11.5m from the UK Government to improve connectivity means the public will have better access to these services which will be faster and more efficient.

"And for those who do the vital work in these locations such as GP surgeries, day care centres and libraries – they will notice a transformation which will allow them to deliver their important work with greater ease.

"The UK Government is continuing to deliver on the peoples’ priorities in Wales.” Many sites in Wales are already feeling the benefits. Anchorage Social Activity Centre, a day centre at Pembroke Dock, works with people with learning disabilities or dementia. Thanks to the upgrade, internet speeds have risen from two megabits per second to 80 megabits per second."

The broadband boost has enabled groups to engage with the benefits of a digital therapy system involving a large touch-screen loaded with materials to improve mood and wellbeing, including music therapy, interactive games, pictures and BBC archive clips. Two Alexas have been ordered for the site, which will be used for music-based activities, and there are plans to link digitally with leisure and library services.

"Fibre has given us the speeds to work more effectively and there are no more spinning circles while we wait for things to load. This has given an additional push to reinvent our service and move forwards.

"We did not really do much with IT before the pandemic but with the enthusiasm of our staff and the upgrade to fibre we can continue to build on that. Faster speeds are vital to us going forwards.”

At Milford Haven Library, connection speeds have rocketed from a sluggish four megabits per second to 150 megabits per second. Members of the public have access to 17 public computers and free WiFi, and the gigabit-capable service has put an end to complaints about a slow network.

"A lot of members of the public come in to use the computers for job searches. People used to say that the internet was very slow, especially when they were downloading documents and we would have to say sorry but there was nothing we could do about it. It’s been great so far, this is a big step forward.”