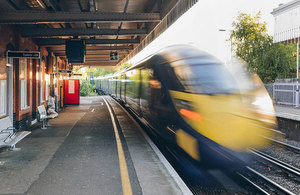 Transport Secretary Chris Grayling has announced a £2 million funding boost for regional transport organisations in the South East of England to develop ambitious strategies to improve journeys for goods and passengers.

As part of the government’s ambition to give regions across the UK greater influence over transport investment decisions, sub-national transport bodies England’s Economic Heartland and Transport for the South East will be given £2 million of government funding to develop innovative transport plans fit for the future of their regions.

These plans will allow people in counties including Kent, Hampshire, Buckinghamshire and Oxfordshire to influence government investment decisions at a more regional level, filling the existing gap between national and local transport authorities.

"This government is committed to empowering regions across the UK by giving them a stronger influence over the future of transport in their area.

"This will help us build the modern and effective links our country needs, improving journey times, boosting housing development and economic growth, and getting people and goods where they need to be faster, safely and more comfortably.

"Investing in England’s Economic Heartland and Transport for the South East means that those best placed to make decisions have our support to put forward ambitious proposals for the future. We will continue to work closely with these organisations as they develop transport strategies to help their regions seize their potential."

"This is a great step forward for our region’s transport system and all the people who rely on it. We’re grateful to the DfT for this vote of confidence in Transport for the South East and in the work we’re doing with them to ensure we have an innovative and efficient network for decades to come."

"We share the government’s ambition to realise the economic potential of our region. England’s Economic Heartland is committed to working collaboratively with the government to ensure that we get the right investment in strategic infrastructure, at the right time, and in the right locations. This vote of confidence in England’s Economic Heartland will help ensure our region can compete on the global stage by exploiting its excellence in innovation, technology and research."

Today’s announcement coincides with Transport for the South East launching its Economic Connectivity Review in Farnborough. This represents a key milestone in its work towards developing a transport strategy for the South East, helping improve journeys for 7.5 million people and 329,000 businesses from Berkshire to Kent.

England’s Economic Heartland is a body covering an area from Oxfordshire through to Cambridgeshire County. It is currently developing its blueprint for transport to unlock jobs and housing across the region.

Both will look to follow in the footsteps of England’s first sub-national transport body, Transport for the North, which became a statutory body on 1 April 2018.