This is the transcript of the keynote speech delivered by Caroline Dinenage, Creative Industries Minister, at the virtual Createch Stage as part of CogX 2020 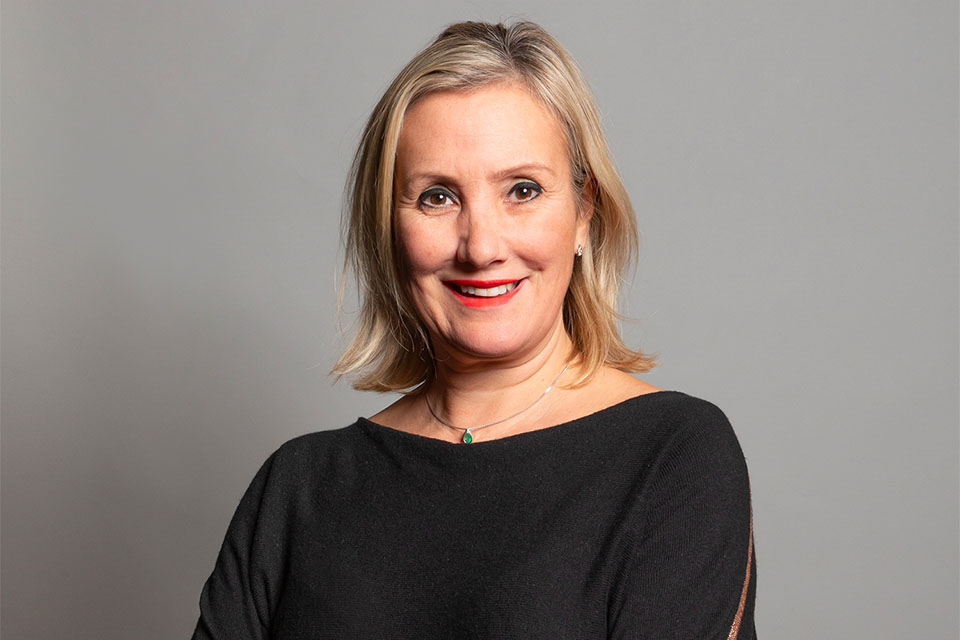 Thank you Tim for that introduction, and many thanks to Janet for inviting me to speak here today. I’m delighted to be participating in Createch 2020 at CogX. Also I’d like to congratulate Tim for his recent appointment as Director General of the BBC, it’s well deserved, and I look forward to continuing our work together in the future.

Let me start by saying two things: First, that the importance of the creative industries cannot be overstated.

In economic terms, the creative industries punch far above their weight. Before coronavirus, they were worth £112bn to our economy in 2018, and their contribution has grown twice as fast as the rest of the economy since 2010. In total, the Creative Industries are now bigger than UK Life Sciences, Aerospace and Automotive sectors combined.

And these are exporting businesses too: they contribute 12% of all UK services sold overseas, which is twice their share of the economy.

They are also enablers of the wider economy. Creative skills and services such as software, architecture, design, and advertising allow businesses - from aerospace to construction - to improve their products, boosting long-term productivity in the UK; which, as many people here will know, is something government and industry both care deeply about.

Around two-thirds of UK firms use design in some form. The architecture sector is critical to construction and how people live their lives; while the advertising sector underpins the whole economy and ensures creative content can reach consumers in the UK and abroad.

But it’s really important to remember that the creative industries aren’t just important economically. They make an incredible social and cultural contribution to this country, and help level-up growth and opportunity across our nations and regions. There are almost 50 clusters of creative businesses around the country - from Dundee’s games hub right the way through to Silicon Beach in Brighton.

Which gives me the opportunity to make an unapologetic plug for the DCMS-funded Creative Scale Up Programme, this is a pilot project designed to help creative business grow and raise finance in the West Midlands, Manchester and the West of England regions.

Culturally, sub-sectors such as film, music, fashion, games, publishing and architecture enrich all of our lives. Critically, they provide content that reflects the experiences of people and communities across the entire UK; content that otherwise would be undersupplied by overseas providers. They allow us to highlight the prestigious UK brand, and our values around the world, and is one of the reasons why we ranked second globally in the Portland Soft Power Index.

Given that importance, the government is investing more than £150m in supporting the Creative Industries Sector Deal and that launched in 2018.

I’d like to emphasise this expenditure comes alongside investment from industry itself, as a result of dialogue with the Creative Industries Council, that Tim co-chairs along with the Secretary of States for DCMS and BEIS. This council has representatives from 30 trade bodies and companies across the sectors, and Tim knows that the government places incredible value on this forum and the close working relationship that it has with industry.

I’ve already mentioned the Creative Scale-Up Programme, but another part of the Sector Deal is the Creative Industries Clusters programme, which runs until 2023 and will create at least 900 business-led collaborations, 360 jobs and 65 new businesses. And then there’s a very exciting project that I am especially keen on: Audiences of the Future programme, which is harnessing the power of immersive tech to help double the UK’s share of the global creative immersive content market by 2025.

The COVID pandemic has given Audiences of the Future added urgency. It’s now a central part of a major new coronavirus-linked campaign by the Arts and Humanities Research Council called Boundless Creativity, and it is looking for new ways for culture to thrive in a digital age.

Boundless Creativity involves all sorts of talented thinkers and creatives, from Mary Beard to Bernardine Evaristo, who together with the UK’s leading arts organisations and creative businesses will experiment with Augmented Reality, Virtual Reality and other technologies in a series of special projects.

One of those projects which I love the sound of is called “Dinosaurs and Robots”, led by London-based factory42, in collaboration with Sky, the Science Museum Group and the Natural History Museum. This project enables people to tour their buildings and enjoy the exhibitions from their own homes this summer, through a mixed reality experience that combines storytelling and cutting-edge technology.

That’s exactly the kind of collaboration the government wants to see between technology and the creative industries: finding new and unusual ways to get round the obstacles that coronavirus has presented.

I should also emphasise that although major elements of the Sector Deal are funded for a number of years to come, DCMS is looking to deliver new help and incentives to the Creative Industries - such as through the launch of 5G Create earlier this year.

Up to £30 million of government funding is available in this 5G Testbeds and Trials programme, which is designed to encourage the exploration and development of new use-cases and 5G technical capabilities.

In particular we want to encourage partnerships between creative and infrastructure companies, so that for example, specialist content companies can look at innovative ways of distributing that content over 5G.

In terms of future prospects, the Creative Industries are critical to the UK’s recovery from COVID-19, given their role as key enablers of the wider economy and significant contributions to the UK’s culture and society.

While we know that some sub-sectors such as gaming and Video on Demand have thrived during the COVID crisis, others have been hit hard. Theatres and music venues are shuttered; Film and TV production has been halted or at least radically changed; and the advertising industry is facing some really widespread disruption. Sectors dependent on advertising like press and commercial broadcasting have been really struggling, even as demand for their services has spiked. The creative workforce, many of whom are freelance, have seen demand fall sharply.

As Tim has said, the existing challenges faced by the Creative Industries are being compounded by COVID, so during this global crisis, Government has provided an unprecedented level of financial support across the economy. Our Creative Industries can benefit from grants and loans for small businesses, the Coronavirus Job Retention Scheme, the Self-Employed Income Support Scheme, tax deferrals and the £1.25 billion fund to protect the UK’s most innovative companies. That includes the Future Fund which is now open for applications until September 2020.

But as we emerge from lockdown, we need to think about the future of the Creative Industries, and how they can not only survive, but regain the very strong growth path they previously had. We need to think about how over the next decade they will become a cornerstone of our country, accounting for an even greater proportion of the economy and employment, and cementing the UK’s soft power around the globe.

That to me is why Createch is so vital to the future of the Creative Industries. We clearly need every tool available, from government policy to innovation and technology, to recover from the current situation and re-start a path of strong growth.

Technology will be central to our recovery, just as it has been a central part of the lockdown - allowing us to work, exercise, socialise and school our kids from the safety of our homes over the last few weeks and months.

The take-up of tech has been staggering over the last few months. Just look at the number of Zoom users, which rose from 10 million in December to 300m in March.

That’s just as true for the creative industries. Through necessity, designers, architects and a whole host of creatives are now collaborating digitally throughout the UK and across borders as never before. I’m sure that not all of this digital work will return to face-to-face working practices in the future.

There is perhaps a new norm going on here, and remote working, or at least spending a greater percentage of the working week at home, may become standard practice in many companies across the economy and the creative industries specifically. In fact, Mark Zuckerberg is already planning for half of all Facebook staff to work from home forever.

But there are other significant changes in terms of technology usage in the Creative Industries. For example, online streaming and delivery of content ‘over-the-top’ is now penetrating from millennials into all age categories you will be pleased to know. Apparently the UK’s so-called peak “hour” for internet use now stretches from noon to 9pm.

Will advertising revenues that have shifted online from traditional media return to their former outlets? That is a question that we are all asking ourselves. Possibly, but it’s probable that companies that rely on traditional advertising will have to adapt business models quicker and rely more on digital revenue streams.

Overall, the application of technology to the Creative Industries is providing and will provide both opportunities and challenges. The Government wants to encourage and incentivise the growth of Createch wherever we can.

It has already produced some incredibly innovative collaborations - like the Future Fashion Factory in Leeds, which is part of our Creative Industries Clusters Programme.

Led by the School of Design at the University of Leeds and partnered with fashion houses like Burberry, it uses digital and advanced textile technologies and applies them to the world of fashion.

For example, there is an amazing piece of tech currently being tested that translates the feel of fabrics into code. This code can then be sent digitally, and used to recreate the feel of the fabric by other designers anywhere in the world.

In layperson terms that’s done by a piece of kit that, from the code of the original fabric, creates and blows a column of air that combines smaller individual ones. You pass your hand over the column and you can literally feel what appears to be the original fabric, whether rough or smooth.

Digitally conveying the tactile properties of a fabric is a truly groundbreaking application of technology to the Creative Industries. Tech here is directly helping the creativity of our fantastic UK fashion designers, and also reduces the economic and environmental impact of the sampling process.

Another fascinating Cluster Programme is the Bristol and Bath Creative R&D project, which brings together the region’s four universities, the Watershed and many industry partners to explore user engagement in new platforms.

The cluster is working at several sites to combine 5G connectivity, Extended Reality technologies and live arts, in order to imagine and develop the future of the Creative Industries.

We need to build on these examples and the success of the Creative Industries Clusters Programme in general. As Tim has mentioned, DCMS is currently talking with industry through the Creative Industries Council - some of whose members are in the audience today - about how the Government can continue to help the adoption of new technologies into all the creative sub-sectors.

Of course achieving this has to come from a joint and ongoing effort from all of us. From government, universities, entrepreneurs and innovators, and from companies within non-tech native sub-sectors themselves. We need the continued contribution of partners such as Digital Catapult, which is leading the early adoption of advanced digital technologies, and companies such as Improbable, which is pioneering groundbreaking tech applications in the games sector.

Government will continue to do its part - and yes I know, we need to do more - but we also need trade bodies, companies and individuals to do their part too as I know you know.

As we slowly start making moves towards recovery, together we’ll continue to drive Createch so that the creative industries can maintain their rightful place at the heart of our economy and society.