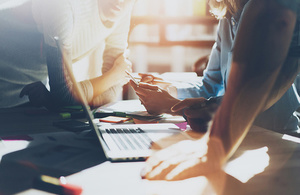 New government figures show the country’s thriving digital sector contributed £149 billion to the UK in 2018, accounting for 7.7 per cent of the UK economy.

This is up 7.9 per cent on the previous year meaning growth in the sector is nearly six times larger than growth across the economy as a whole, which increased by 1.4 per cent.

Up until the mid 2010s, the sector had been growing in line with the wider rate of UK economy growth. But the official figures show that in 2015 the digital sector’s growth started to outstrip the economy as a whole and has continued on an upward trajectory since.

The digital sector figures published today take into account the contributions of digital businesses up and down the country across a range of specialisms.

This includes software publishers such as Newcastle-based software provider Sage, which started small but now has more than 13,000 staff.

Another sub-sector covered in this report is electronic manufacturers, such as Newport-based IQE, a global leader in the design and manufacture of products for computer chips tipped to power everything from electric cars to 5G.

"Technology is a sweet spot of our economy, bringing jobs and wealth across the country.

"The success is thanks to our business friendly environment and fantastic workforce.

"We are working hard to continue this momentum by strengthening regional tech clusters supporting digital businesses and investing in people’s digital skills."

In total, the Department for Digital Culture Media and Sport (DCMS) sectors (excluding tourism) contributed £224.1 billion to the UK in 2018, accounting for 11.7 per cent of the economy as a whole. Headline figures for additional DCMS sectors include:

The Creative Industries contributed £111.7bn to the UK economy in 2018 - up 7.4 per cent from the previous year, meaning growth in the sector is more than five times larger than growth across the economy as a whole.