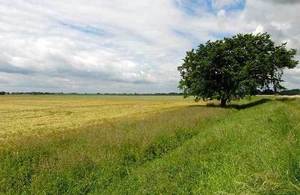 Farmers, landowners and food producers have a once-in-a-generation opportunity to shape the future of English farming and the environment, with a consultation launched today (27 February) by Environment Secretary Michael Gove.

The government’s proposals will see money redirected from direct payments under the Common Agriculture Policy (CAP), which are based on the amount of land farmed, to a new system of paying farmers “public money for public goods” - principally their work to enhance the environment and invest in sustainable food production.

Other public goods which could be supported include investment in technology and skills to improve productivity, providing public access to farmland and the countryside, enhanced welfare standards for livestock and measures to support the resilience of rural and upland communities.

In line with its manifesto commitment, the government will continue to commit the same cash total in funds for farm support until the end of this Parliament in 2022.

It has today set out proposals for an ‘agricultural transition’ lasting a number of years beyond the implementation period during which direct payments would continue, providing stability and certainty for farmers as they prepare for the new system.

At the same time, however, reductions to direct payments to the largest landowners first could free up around £150 million in the first year of the agricultural transition period, which could be used to boost farmers delivering environmental enhancement and other public goods.

"As we leave the EU, we have a historic opportunity to deliver a farming policy which works for the whole industry. Today we are asking for the views of those who will be affected to make sure we get this right so any future schemes reflect the reality of life for famers and food producers.

"The proposals in this paper set out a range of possible paths to a brighter future for farming. They are the beginning of a conversation, not a conclusion and we want everyone who cares about the food we eat and the environment around us to contribute."

As set out by the Secretary of State at the NFU Conference last week, the consultation is an opportunity for farmers to be more central to government thinking than any time for fifty years as the UK leaves the EU.

Among the range of proposals put forward by the government in today’s consultation, ‘Health and Harmony: The Future for Food, Farming and the Environment in a Green Brexit’, the Government is seeking views on:

• Options for how to gradually phase out direct payments, starting with the largest landowners, whilst developing a new environmental land management scheme.
• The range of public goods that could qualify for government funding under the new schemes, such as high animal welfare standards, wildlife protection, public access, and new technologies.
• Measures to move away from heavy handed enforcement which penalises farmers for minor errors, including a more efficient inspection regime to uphold important environmental and animal welfare standards.
• New business models and incentives for industry to invest in innovation and new technologies to increase their profitability.

The current system of support for farmers and landowners shaped by the CAP is inefficient and inequitable. It does not secure the public goods needed to enhance our environment such as resilient habitats, richer wildlife, healthier rivers and cleaner water.

Farm payments in 2019 will follow the existing model, and in the meantime, the government has pledged to simplify applications for farmers wishing to enter into existing schemes to provide environmental benefits such as Countryside Stewardship.

The consultation will run for ten weeks, closing on 8 May 2018.