£360 million investment to transform rail ticketing across the country 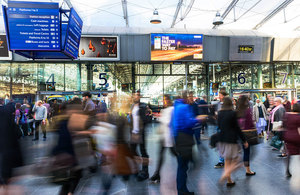 An investment of £360 million will radically reform and improve passengers’ experience of fares, ticketing and retailing on the railways.

Over the next 3 years, the government will roll out contactless pay-as-you-go ticketing across the commuter networks of the Midlands and North – introducing London-style price caps and greater integration with local bus and tram networks.

This is just the first stage of the government’s commitment to roll out convenient and modern digital ticketing across the whole rail network, improving thousands of daily commutes, simplifying journeys and ensuring passengers are charged the best price.

It will also help to create a rail network that will not only deliver the types of journeys that create jobs, supports businesses and unlocks housing opportunities, but will level up the Midlands and the North to become an economic power base to rival London and the South East.

"Passengers across the North and Midlands have waited far too long to see the same fast, easy and convenient ticketing as those in London. We’re determined to put that right.

"Today’s investment is just the first phase of our efforts to overhaul our rail network, focused on improving journeys for passengers right across the country."

This comes ahead of the publication of the Integrated Rail Plan (IRP) and, once the full programme is delivered, cities across the North of England will have access to a contactless ticketing scheme.

The IRP will shortly set out how the government intends to transform rail across the North and Midlands while delivering benefits for passengers far sooner than under previous plans.