Early cancer detection and survival to be prioritised by NHS 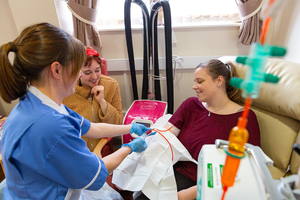 Screening programmes will be overhauled and diagnosis made faster and more accurate with new state-of-the-art technology as part of a blueprint for rapidly improving cancer detection and survival announced by Matt Hancock.

Speaking in the House of Commons, the Health and Social Care Secretary set out how the NHS will deliver on its commitments to improve early detection of cancer.

In January, the NHS Long Term Plan set the ambition for three-quarters of all cancers to be detected at an early stage and 55,000 more people surviving cancer for 5 years each year by 2028.

The Implementation Framework, agreed by the NHS and laid in Parliament today, provides a blueprint for how this will be achieved at a local level. The one-year metric will be used to measure progress.

"Early detection and diagnosis are essential to improving a person’s chance of survival from cancer.

Since 2010, cancer survival has improved year-on-year but, historically, our survival rates have lagged behind the best performing countries in Europe. In our Long Term Plan for the NHS, we set out a clear ambition to resolve this – and this framework sets out a step-by-step blueprint for local leaders to make that a reality.

"I am determined that our cancer care will not be just good enough, but truly world-class and today I have set out how we will do just that."

Steps in the framework include:

• a radical overhaul of screening programmes
• new state-of-the-art technology to make diagnosis faster and more accurate
• more investment in research and innovation
• the roll-out of new Rapid Diagnostic Centres across the country, building on the success of a pilot scheme with Cancer Resarch UK
• NHS England extending lung health checks, targeting areas with the lowest survival rates
• Health Education England increasing the cancer workforce, which will lead to 400 clinical endoscopists and 300 reporting radiographers by 2021

The document sets out the framework through which each of the 300 commitments in the Long Term Plan will be delivered – including the 20 headline commitments – as well as how government will monitor and support systems at a local level.

Mental health and workforce are among the other priorities highlighted in the implementation framework, with a record £2.3 billion extra every year for the expansion of mental health services and five-year NHS People Plan.

Based on the implementation framework, local strategic plans are now being developed across England and will be brought together as part of a national strategy by the end of the year.

The Department of Health and Social Care will also review the current functioning and structure of the Better Care Fund, with NHS England contribution to social care via the fund expected to be in line with NHS revenue growth.

From:
Department of Health and Social Care