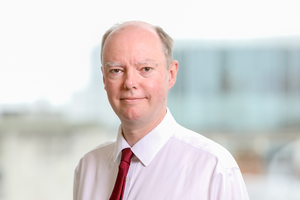 The appointment has been made with the support of the Prime Minister, and follows an external recruitment competition.

Professor Whitty is currently Chief Scientific Adviser for the Department of Health and Social Care.

He has overall responsibility for the department’s research and development, including the National Institute for Health Research (NIHR) and life science strategy.

He is also the Professor of Public and International Health at the London School of Hygiene and Tropical Medicine, a practising NHS Consultant Physician in acute medicine and infectious diseases at University College London Hospitals, and Gresham Professor of Physic.

He will replace Professor Dame Sally Davies, the current Chief Medical Officer, when she takes up a new role as master of Trinity College Cambridge in October 2019.

Professor Whitty will continue to lead the NIHR for the foreseeable future.

"It is a huge honour to be given the opportunity as Chief Medical Officer for England to be able to support colleagues in public health, the NHS and social care around the country to improve the health of the nation.

"I look forward to working within DHSC and across Whitehall to support the government in leading the nation’s health and care."

"I am delighted that Chris Whitty has been appointed as the Chief Medical Officer for England.

"He is doing an excellent job as Chief Scientific Adviser and will bring to his new role a wealth of relevant experience from his previous roles in public health, most recently as Professor of Public and International Health at the London School of Hygiene and Tropical Medicine and as an NHS consultant.

"I look forward to working with him in his new role."

"Professor Chris Whitty will make an excellent Chief Medical Officer, bringing his extensive clinical experience and a passion for keeping the nation healthy.

"I can think of no better person to lead the fight against infectious diseases, public health threats, and lead the medical profession to continue keeping us as healthy as possible."