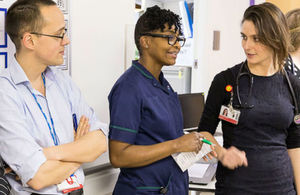 A new to goal to eliminate the ethnicity pay gap in the NHS has been announced, with black, Asian and minority ethnic (BAME) representation in senior leadership to match that across the rest of the NHS by 2028.

Diversity across the NHS is above the national average, with BAME staff making up 17% of the non-medical NHS workforce. However, only 11% of senior managers are BAME. This drops to 6.4% at a very senior level.

In light of the figures, Health Minister Stephen Barclay set a goal for the NHS to ensure BAME representation at very senior management levels will match that across the rest of the NHS workforce within 10 years.

In addition, a number of the Department of Health and Social Care’s (DHSC) arm’s length bodies, including NHS England, Public Health England and Health Education England, have signed up to the new Race at Work Charter. This will recognise organisations who sign up to the 5 calls to action from the McGregor-Smith review: one year on to:

In September the NHS became one of the first public sector organisations to publish breakdowns of pay for all staff by ethnic group, with some individual trusts already publishing their own data and taking action.

DHSC is working with NHS Improvement, NHS England and Health Education England to implement the goals for leadership equality.

"The NHS is a leading light of talent for people from all communities and backgrounds, with diversity levels far in excess of the national average. However, it is unacceptable that this is still not reflected at the very top of the organisation – this kind of inequality has no place in a modern employer and I’m determined to tackle it.

"That’s why I have set an ambitious goal for the NHS to ensure its leadership is as diverse as the rest of the workforce within the next ten years, supporting a culture that allows diversity to thrive at all levels."

"Having an NHS workforce that is representative of the population improves patients’ care, safety and overall satisfaction with the health service.

"The annual Workforce Race Equality Standard is an honest and open analysis which shines a light on where we need to perform better for our staff. Although I’m confident that the NHS in England is moving in the right direction – as shown by the recent increase in senior managers from BAME backgrounds and more NHS trusts having board-level BAME representation – it’s equally clear that we have some way still to go."