After two years of setbacks inflicted by the global pandemic, the Great British Spring Clean is back in full swing – and National Highways is urging road users to help slash litter levels by saving it for the bin 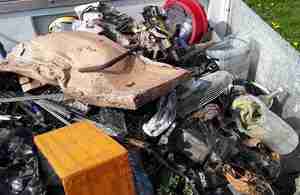 Rubbish retrieved from the fly tipping site in Sheffield

The government-owned company has once again joined Keep Britain Tidy’s national litter-picking effort, which runs from today (25 March) to 10 April, in a push to clear rubbish from the roads.

Litter takes a devastating toll on the environment and costs around £1 billion every year to clean up. It also poses a serious safety risk as road verges and barriers form corridors where litter and debris build up at an alarming rate, creating a hazardous environment for road users, wildlife and the maintenance crews who clean it up.

"We’ve taken up Keep Britain Tidy’s ‘Big Bag Challenge’ and pledged to pick at least 8,000 bags of litter for this year’s Great British Spring Clean. Over the course of the last six campaigns we’ve collected 60,000 bags, and we’re proud to be joining this vital cause for its seventh year.

"Our priority is to keep our roads safe and well maintained, and litter is a huge issue that we’re tackling daily. We value Keep Britain Tidy’s commitment to eliminating litter, as well as their partnership in our efforts to keep litter off our roads.

"The simple fact is that if litter wasn’t dropped in the first place it wouldn’t need to be picked up. So, this is an opportunity to remind people that they too can make a difference simply by saving litter for the bin."

Ahead of today’s launch, National Highways has been working closely with local authorities, who are responsible for collecting litter on most A-roads in England. In February, Stoke-on-Trent council joined forces with National Highways, utilising existing road closures to clear over 15 tonnes of litter and debris from the A50. This collaborative effort saved the council around £40,000 while minimising disruption for road users.

"Thanks to our partners at National Highways for once again highlighting the problem of litter on our country’s roads. Litter dropped along roads is dangerous to pick up and a hazard to car drivers and cyclists.

"We have a strong sense of civic pride in our city, and the last thing we want to be doing is fining people for dropping litter. But it is a strong deterrent, and we will do so if we need to. The message is simple, leave your litter in your car and pop it in your bin when you get home to keep our roads clean."

National Highways itself is responsible for collecting litter from England’s motorways and a small number of A-roads.

A ‘day of action’ near Manchester at the start of April will see National Highways maintenance teams joined by Keep Britain Tidy for a targeted litter collection on the M56.

And around Sheffield, teams are doing a spring clean of culverts and roadside drainage systems, clearing items dumped by fly tippers to reduce flood risks for local communities.

In the South East, GoPro cameras are being used to monitor litter ‘hot spots’. This technology helps maintenance teams highlight problem areas, and analyse how quickly they fill up again with rubbish after cleaning. The M25 is one of the routes currently being monitored.

Meanwhile National Highways colleagues will also be taking matters into their own hands – quite literally - by litter picking in their local communities.

"We’re delighted that National Highways are once again supporting the Great British Spring Clean by performing dedicated clean-ups of litter hotspots on the road network.

"This is often risky work, and we reiterate our message to the public not to be tempted to litter-pick on fast-moving roads because it’s extremely dangerous.

"We encourage everybody to respect the fact that highway workers face grave danger when having to collect litter thoughtlessly thrown from vehicles, and to keep their rubbish in their vehicle until they can dispose of it correctly."

While this annual campaign runs for a matter of weeks, National Highways picks litter throughout the year and carries out regular inspections to make sure England’s motorways and major A-roads are in good condition. The company wants to hear from you if you spot something wrong on the road. This could be anything from a broken sign or barrier, to litter, overgrown vegetation or potholes.

You can report a maintenance issue to National Highways online or by calling 0300 123 5000.

Get more information on the Great British Spring Clean.