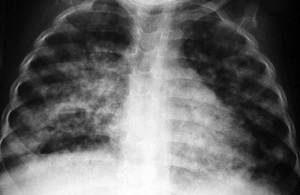 New data published by Public Health England (PHE) reveal that the number of people in England diagnosed with tuberculosis (TB) is at its lowest level since 1990, raising the hope that it will soon be consigned to the history books.

The incidence rate of TB in England is now 9.2 per 100,000 population – taking England to below the World Health Organisation definition of a low incidence country (10 per 100,000 population) for the first time. TB is high on the global political agenda, as Heads of State gather in New York for the first UN High Level Meeting on tuberculosis, with the shared ambition of ending TB across the world.

Public Health England has played a key role in driving down the rates of TB in England, working with NHS England and other partner organisations to implement the ‘Collaborative Tuberculosis Strategy for England 2015 to 2020’. This includes raising awareness and tackling TB in underserved populations, implementing testing for latent TB in those arriving from countries with high rates of TB, and strengthening surveillance and monitoring.

"It is hugely encouraging to see a continued decline in TB in England which shows that the interventions we are putting in place are having an impact and will hopefully one day soon consign TB to the history books. While these new figures are positive, challenges still exist.

"The proportion of people who experience a delay between symptom onset and diagnosis remains stubbornly high. We are working across England to ensure that patients are diagnosed and treated as soon as possible to minimise the chance of long-term ill health and onward transmission.

"The risk factors for tuberculosis – a bacterial infection that primarily affects the lungs and causes persistent cough, fever and weight loss – include homelessness, poor quality housing, alcohol and substance misuse.

"The new data indicates that nearly 13% of people with TB have a ‘social risk factor’ and that they are more likely to have drug resistant infections and are less likely to complete treatment, prolonging the infection and increasing the risk of onward infection."

"We’re committed to keeping people healthy, and the steep decline of TB rates in this country is a testament to our world-leading approach. We are also helping other countries to go further in the fight against TB, with funding and research.

"However, in the UK the poorest are still 7 times more likely to have TB than the most well off, and we have to drive down this inequality.

"The UN High-Level Meeting on TB will be a prime opportunity to join forces with other countries and push further in the global effort to eliminate TB for good – in our country and around the world."