Major A12 upgrade to speed up journeys and improve safety

Major improvements are on the way for the 90,000 drivers who depend on the A12 near Chelmsford every day 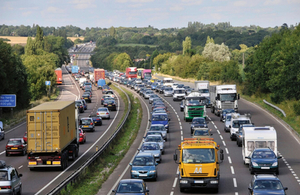 Plans announced today (Monday 21 October) by Highways England will reduce congestion and accidents on the route – a key link between the East of England and London – by widening a 15-mile section of the road between Chelmsford and Marks Tey.

Today’s announcement confirms a preferred option for widening the A12 between junctions 19 and 23, and sets out four new options for improvements between junctions 23 and 25, which take into account plans for a new garden community at Marks Tey.

Stephen Elderkin, Highways England project lead for the A12, said:

"The A12 is a key route connecting the East of England to London. With the high levels of congestion, it’s a route that Highways England and the Government are committed to improving. Our proposed improvements will increase safety and average speeds, so that someone travelling on the A12 daily can expect to save over an hour of travel time each week."

"I want the A12 to be as safe as possible for the 90,000 people who use it each day. That is why we are committed to modernising this major road, supporting growth in the region and improving journeys for all."

Currently rush hour congestion increases journey times by half, and the various local access points onto the road raise safety concerns, as collisions on this road are 20 per cent more likely to result in death or serious injury.

Although Highways England previously consulted on how best to upgrade this 15-mile stretch of Essex road into three lanes in 2017, plans were subsequently put forward for a proposed Colchester Braintree Borders Garden Community at Marks Tey which could impact on the suggested A12 route. Highways England believes it is important to ensure that the new road meets the future needs of the area, so it has since worked in partnership with the relevant local authorities to consider how the A12 could support the proposed housing growth.

Today Highways England is announcing its preferred route to upgrade the road between junctions 19 and 23 (which are to the west of where the new homes may be built), so that its work on the A12 can start while plans for the new development are under discussion. The preferred route would widen the existing A12 corridor between junctions 19 and 23 to three lanes in each direction at key places, and would see a new three-lane bypass in each direction at Rivenhall End.

Highways England remains committed to upgrading the whole stretch of the A12 between Chelmsford and Marks Tey. A further non-statutory consultation opens today to gather public feedback on four new routes running between junctions 23 and 25 that could be used if the proposed garden community does go ahead. These are four alternative routes for this consultation, with those consulted on in 2017 remaining viable options for the route should the new development not go ahead.

Once the new three-lane A12 route is built, the existing road will be retained and handed over to Essex County Council for use by local traffic.

The new public consultation on routes between junctions 23 and 25 is open for six weeks and includes ten events where people can find out more and put any queries to the A12 project team. The public can also give their views online at the consultation page, or by post.

The consultation closes at 11:59pm on Sunday 1 December.

Following this, Highway England expects to announce its preferred route between junctions 23 and 25 in summer 2020. A statutory public consultation to get feedback on its more detailed designs for the full stretch of road between junctions 19 and 25 will then be held, ahead of submitting an application for a Development Consent Order in 2021.