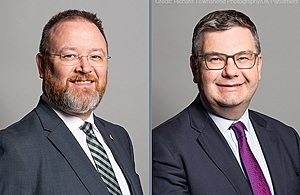 "It is great news that Iain Stewart and David Duguid have been appointed as UK Government Ministers for Scotland. Talented and experienced, they will both bring a great deal to government at this critical time.

"There are huge challenges and great opportunities ahead for Scotland. As we continue to tackle coronavirus and protect the public’s health, start to recover our economy, and look forward to a new relationship with the EU, we will make sure that Scotland’s interests are at the forefront.

"I would like to take this opportunity to again thank Douglas Ross for his very valuable contribution in his time as a minister, and to wish him well for the future."

Following his appointment as Parliamentary Under Secretary of State for Scotland, Iain Stewart said:

"It is a great honour to have been appointed by the Prime Minister as UK Government Minister for Scotland.

"We are facing a global crisis, and the UK Government is working tirelessly to tackle the pandemic in all parts of our country. We have stepped up to help Scottish businesses with financial support, furloughed millions of workers across the country, and supported the Scottish Government with £3.7 billion of extra funding.

"As we start to slowly ease the restrictions, our focus must be on continuing to keep our citizens safe. But it must also be on beginning to recover Scotland’s economy, protecting jobs and ensuring our future prosperity.

"I look forward to working with the ministerial team at the Scotland Office as part of a UK Government which is delivering for people in Scotland. I am very proud to be given the opportunity to make a contribution at such a vital time for our country."

Following his appointment as Parliamentary Under Secretary of State for Scotland, David Duguid said:

"I am honoured to have been appointed as a UK Government minister for Scotland.

"My focus will be very much on Scotland’s economy as we get things moving after the coronavirus pandemic. As part of that, I will continue to champion our transformative investment of more than £1.4 billion in Scottish city and growth deals, as we extend their cover to the whole of Scotland.

"Looking ahead, we will ensure that our new relationship with the EU works for Scotland, bringing new opportunities for many of our vital industries, including Scotland’s farmers. We will ensure that Scotland’s fishing industry has a bright future as we leave the unfair common fisheries policy and become, once again, an independent coastal state."