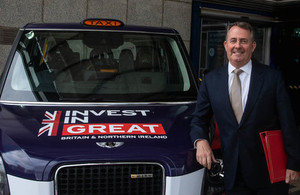 Over £500m worth of investment was secured around the summit creating more than 1,000 jobs across the UK. This includes Aston Martin creating jobs in south Wales, the UK’s largest independent vehicle battery manufacturing plant opening in Coventry and a new R&D centre for electric vehicles opening in Birmingham.

The summit also saw major investment from American automotive firms. Lear Corporation invested £54m in its UK operation – creating 220 jobs and safeguarding another 600 – and Cummins committed to investing £210m in R&D over the next three years.

Dr Fox was also on hand to see the LEVC (London Electric Vehicle Company) announce it is starting trials of its new electric van in London. Backed by Chinese firm Geely, the makers of the iconic electric taxi could see their electric vehicles introduced into the fleets of the Met Police and London Fire Brigade – helping them achieve their target for all new vans to be zero emission capable from 2025.

"At the summit, the Prime Minister and I sat down with 14 automotive investors to ask them why they invest in R&D in the UK and what more the government can do to support. Around that table it was clear that there is already confidence in the UK’s investment proposition and that’s why we remain the number one destination for investment in Europe.

"International firms are building their futures in the UK – investing in research and development, creating jobs and ensuring the UK maintains its edge in the industries of the future.

"Take LEVC for example whose growth and technological advance is made possible by foreign investment. This, in turn, allows them to export their iconic electric taxi around the world and now sees them applying this technology to vans which could reduce the carbon footprint of iconic UK fleets like the Met and London Fire Brigade.

"This is British innovation in action and with the launch of our new Export Strategy, my international economic department will help even more innovative UK firms to reach markets around the world."

The automotive roundtable was the third in the Government’s series of investment roundtables, led by DIT, which promote UK industry opportunities to a global audience, and drive foreign direct investment into the UK as we prepare to leave the European Union.