End of an era as stamp presses decommissioned by HMRC 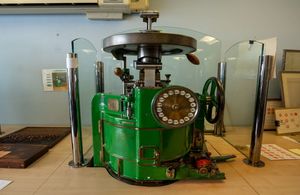 HM Revenue and Customs’ (HMRC) Stamp Duty press machines will be officially retired from service on 19 July 2021, marking the end of over 300 years of tax-related history.

From mid-July, an electronic process will be adopted for the remaining transactions which still required physical stamps, such as duty paid on shares purchased on a stock transfer form.

The introduction of the new process took place during the pandemic, as traditional physical stamping could not function under COVID-19 restrictions. Having worked well as the nation was under lockdown, HMRC decided to retain the new approach.

This change in process leaves the stamp presses themselves in need of new homes. Three of the presses will be retained by HMRC and installed in the newly-created regional centres as a nod to the department’s lengthy history, but an appeal is now being made to search for suitable institutions which might be keen to take on one of the five remaining decommissioned presses, preserving them for their historical significance.

The now defunct stamp presses are around one 100 years old and can trace their origins back to the Victorian era, but the process of stamping documents to show that tax had been paid began in England long before that.

The first ‘stamp duty’ was introduced in 1694 as a temporary measure to fund the war on France. It was paid on all paper, vellum or parchment to be used for legal documents, and payment was indicated by an embossed, colourless stamp, hence the name.

Various duties where payment was indicated by stamps were devised and withdrawn over the years, applying to anything from dice and playing cards to hats, gloves and mittens. Once ink technology improved in the 1870s, stamp presses were developed and redesigned to stamp many different values and be more efficient and secure.

Over the years the amount of different items subject to Stamp Duty has greatly reduced, with one of the biggest recent changes coming in 2003, when Stamp Duty Land Tax on land and property was introduced. As this was a transaction tax and returns based, physical stamps were not required leading to the closure of many regional stamp offices across the country.

The presses, which will now be seeking a new home were designed by the Stamp Office and built by the internal engineering section using parts supplied by Grover and Co, an engineering firm once based in Britannia Works, Wharf Road, London. They are 18-die recording presses, which were able to stamp various denominations and tally the stamps they embossed every day. The individual dies they could stamp varied in value from 50p to £1 million.

"This is a significant day in HMRC’s history and marks a permanent change in the way that we operate. The new digital process operated well during national lockdown when it was much easier to use virtual rather than physical stamping. As this effectively amounted to a successful trial it convinced us that this was the right time to end the process of physical stamping and decommission our presses.

"In many ways it is sad to see the presses go, almost like seeing a life-long colleague retire, but it is wonderful that HMRC is able to keep and enjoy the stamp presses themselves in so many of our new offices, where they will make decorative and informative talking points, acknowledging our past in the very places that are so important to our future.

"Now what we’d most like to do is secure long-term homes for the remaining pieces, which are well crafted and represent elements of both British industrial history and financial history."

The presses are very heavy, weighing 685 kilograms, and will require careful handling and strong flooring. They would be ideally suited to museums or financial institutions with sufficient space seeking a historical focal point for their building.

Any organisations who may be interested in rehoming a decommissioned stamp press from HMRC, please contact stamp.presses@hmrc.gov.uk to find out more.

See more information on stamp duty for shares or details of the payment process.

The official announcement of the end of physical stamping was issued on 18 June 2021 in the London, Edinburgh and Belfast Gazettes. It is a legal requirement that these notices be placed in order to withdraw the physical stamp dies owing to section 22 of the Stamp Duties Management Act 1891.