Every pound invested in the design and development of space science missions like Solar Orbiter, results in between £2.50 and £4 in returns, a new report shows 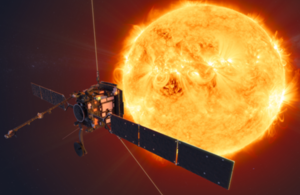 The study found that £523 million of UK Space Agency funding put into the European Space Agency’s Space Science Programme (SSP) has generated £1.4 billion of income for UK industry, with a further £1.1 billion from partially attributed and forecast benefits.

To support UK involvement in the build and data exploitation of the science instruments themselves, the UK Space Agency provides separate funding to the academic community.

One of the missions addressed by the report, Solar Orbiter, is due to launch in February. This will take the most detailed images ever of the Sun and provide crucial information about how our star’s volatile activity affects its atmosphere. This knowledge will help improve predictions of space weather events, which can disrupt and damage satellites.

The UK is at the heart of this ESA mission, with Airbus at Stevenage winning the contract to design and build the spacecraft. This could become the template for an operational programme to monitor and warn us of approaching Space Weather. Meanwhile Imperial College London and UCL Mullard Space Science Laboratory are leading international teams to design and build two instruments while the Science and Technology Facilities Council’s RAL Space and UCL are major contributors to two more and from which future operational requirements will be defined.

"Having a major role in space science programmes is like playing in the Champions League. Technology doesn’t get much harder than this and the insights these missions offer and the skills they create permeate the entire UK space economy – supporting our leading role in areas such as telecommunications, Earth observation and weather satellites."

The report, commissioned by the UK Space Agency, also found the UK’s investments in space science have led to the development of new skills in the sector and improved facilities, such as clean rooms, computing and mechanical equipment.

In November the UK Space Agency joined all ESA member states in supporting a 10% rise to the overall space science budget, taking the UK’s share to around £600 million over a five-year period. This will increase the number and ambition of space science missions, including missions to use gravitational waves to study black holes and to intercept and study a pristine comet in our solar system.

SSP is designed to undertake scientific research concerning the solar system, our Sun and the Universe beyond. At the same time, the programme is charged with stimulating competitive industrial capability.

In addition to these direct industrial contractual benefits, UK investment aims to facilitate technology transfer, industrial-academic knowledge transfer, and contribute to the UK skills base by attracting and developing young talented scientists and engineers through high profile missions.