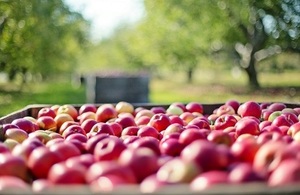 The Government will quadruple the number of workers farms can recruit on a temporary basis from outside the EU this year to take up seasonal work.

Environment Secretary George Eustice confirmed today [19 February] the expansion of the Seasonal Workers Pilot to allow farmers to hire up to 10,000 workers in 2020 – an increase from the previous 2,500 workers.

This will support the UK’s vital horticulture sector and give fruit and vegetable growers access to a much bigger pool of workers this year to help pick and gather even more Great British produce.

With soft fruit production in the UK continuing to skyrocket – growing by 185% between 1998 and 2018 – the expansion will support these farmers over this year’s busy summer harvest, while allowing government to test the pilot further.

The announcement delivers on the commitment set out in the Government manifesto and comes as Home Secretary Priti Patel today set out plans for a new UK points-based immigration system, which will open up the UK to the brightest and the best from around the world, while reasserting control of our borders.

"The farmers and growers I’ve spoken to have made a powerful case for needing more workers during the coming busy months.

"Expanding our Seasonal Workers Pilot will help our farms with the labour they need for this summer’s harvest, while allowing us to test our future approach further.

"We will always back our farmers and growers, who produce world-famous British food to some of the highest standards anywhere in the world."

The Seasonal Workers Pilot opened in 2019 and is designed to test the effectiveness of our immigration system at supporting UK growers during peak production periods, whilst maintaining robust immigration control. It will allow farms to hire workers for a period of up to six months and will continue to run until the end of 2020.

The expansion will allow government to keep testing how this pilot operates further, while helping to ease some of the pressure felt on farms when they are at their busiest.

Although the numbers are increasing based on the success of the pilot so far, it is not designed to meet the full labour needs of the horticultural sector. This workforce boost will complement the EU workers already travelling to the UK this year to provide seasonal labour on farms during the busy harvest months.

The pilot will be evaluated ahead of any decisions being taken on how future needs of the sector will be addressed.