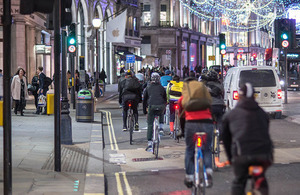 • Department for Transport plans to bring road safety legislation up-to-date to protect vulnerable road users
• proposals include clamping down on dangerous cyclists, following a campaign earlier this year to clamp down on dangerous drivers
• also includes setting national guidance for cycling and walking infrastructure
• plans form part of a government drive to encourage more people to take to two wheels, or two feet, to get around

Road users would be kept safer under new government proposals that include changing the law and building better infrastructure.

A new consultation, open for 12 weeks from today (12 August 2018), will look at whether a new offence equivalent to causing death by careless or dangerous driving should be introduced for dangerous cyclists.

More is also being done to protect cyclists and pedestrians who use our roads safely, including a push for higher standards for cycling and walking infrastructure across the UK.

These measures follow the launch earlier this summer of a UK-wide initiative to help police crackdown on dangerous drivers who pass cyclists too closely in a two-pronged approach to make our roads safer.

The Department for Transport is also looking at updating parts of the Highway Code, including measures to counter the dangerous practice of ‘close passing’ which puts people off cycling, and would benefit other vulnerable road users like horse riders.

"In recent weeks we have announced a range of measures designed to protect vulnerable road users such as cyclists and pedestrians. These include new measures to combat close passing, training for driving instructors, better collision investigation and £100 million in new investment through the Safer Roads Fund.

"Now we are taking further steps. These include a consultation on new cycling offences, further work on national guidance on cycling and walking infrastructure, and improvements to the Highway Code.

"these measures are designed to support the continued growth of cycling and walking, with all the benefits they bring to our communities, economy, environment and society."

In 2016, three pedestrians were killed and 108 seriously injured after being involved in collisions with pedal cyclists.

Matt Briggs, whose wife Kim was killed by a cyclist in 2016, said:

"I welcome the government’s proposals for new legislation around causing death and serious injury by dangerous and careless cycling. This public consultation is an important step towards updating the arcane laws that are currently being used to prosecute cycling offences.

"I would urge people to contribute to the consultation and of course to support the proposed changes to the law.

"I also acknowledge that it is just under a year since I began my campaign for new legislation after the death of my wife, Kim Briggs, and I would like to thank the Department for Transport and in particular, Jesse Norman MP, for responding to my campaign in such a positive and expeditious manner."

As part of the Cycling and Walking Safety Review, the government has commissioned the Cycle Proofing Working Group to develop national guidance and best practice for cycling and walking infrastructure, so that all road users can benefit from the best facilities. Finally, the government has also announced today that £1 million will be provided to support the pathfinder demonstration projects for repairing and upgrading sections of the National Cycle Network (NCN).

The measures announced today are a further extension of a wider set of road safety measures set out in a recent ministerial statement.

Separately, the Department for Transport has also announced that it is gathering evidence on the effectiveness of current laws on pavement parking to address safety issues concerning cyclists, pedestrians, and other vulnerable road users.

In June, the DfT announced plans for a £500,000 pilot scheme offering driving instructors bespoke training to ensure cyclists’ safety is at the forefront of their minds when they teach new drivers.

Earlier this year, the department also awarded more than £7 million of funding as part of the first response to the Cycle and Walking Safety Review. The money will be spent on a range of improvements to encourage more people to cycle safely as part of their everyday journeys – from a new 6km cycle route in West Yorkshire to improving crossings for cyclists and pedestrians in Bristol and Cambridge.

The department’s call for evidence on cycling and walking, which closed at the start of June, gave people the opportunity to share their views and opinions on ways to improve cycling and walking safety from improved infrastructure to education for all road users. The findings of the consultation will be shared in due course.