Government is to widen the ban on exclusivity clauses, removing red tape and giving lowest paid workers the choice to work multiple jobs if they wish 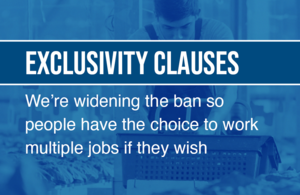 Britain’s lowest paid workers will be given the flexibility to boost their income through extra work, under new plans set out by the government today (Monday 9 May).

The proposals will widen the ban on exclusivity clauses, which restrict staff from working for multiple employers, to contracts where the guaranteed weekly income is on or below the Lower Earnings Limit of £123 a week. An estimated 1.5 million workers are earning on or below £123 a week and the new reforms will ensure that workers in this group that have exclusivity clauses are able to top up their income with extra work if they choose.

The reforms will give workers more flexibility over when and where they work to best suit their personal circumstances such as childcare or study, including the option of working multiple short-hours contracts.

As well as supporting workers to increase their income, the reforms will also benefit businesses by widening the talent pool of job applicants to those who may have been prevented from applying for roles due to an exclusivity clause with another employer, and also helps businesses to fill vacancies in key sectors like retail and hospitality. The reforms will allow low-paid workers to reskill and make the most of new opportunities in existing sectors with growing labour demand.

This follows government action to support people with their cost of living and help the lowest paid workers keep more of what they earn, including increasing the National Living Wage to £9.50 per hour – equivalent to an extra £1,000 a year for a full-time worker – and cutting taxes for the workers on Universal Credit – putting an extra £1,000 back in their pockets.

"We are creating a high skilled, high productivity labour market that supports workers by removing unnecessary red tape, helping the British people boost their incomes and keep more of what they earn.

"By extending the ban on exclusivity clauses, we are putting more control into the hands of the lowest paid, giving them the freedom to decide who they work for and how often, including the option to top up their pay packet if they wish."

While not everyone will want a second job, the reforms will remove red tape that prevents those who want to do so – for example, gig economy workers, younger people, or those from disadvantaged backgrounds facing barriers to entering the labour market.

By giving more workers the option to take on additional work on short hours contracts, the reforms could also help increase businesses’ confidence to create jobs with contracts which suit them and their current circumstances.

Legislation for these reforms will be laid before Parliament later this year. The proposals follow the conclusion of a consultation launched by government in December 2020, which sought views on extending the ban on exclusivity clauses beyond zero hours contracts.

Some responses to the consultation highlighted the impact that COVID-19 has had on job security and its decrease in guaranteed working hours. Extending the ban to those earning below the Lower Earnings Limit will therefore enable vulnerable workers who have been moved to reduced hours contracts, due to the pandemic, to increase their income.

The reforms come at a time when there are more employees on payrolls than ever before. The move will also make workplaces fairer, reflecting the government’s commitment to protecting and enhancing workers’ rights across the country.

The government is clear that everyone deserves to be treated fairly at work and rewarded for their contribution to the economy, both in terms of fair pay and fair working conditions. The government is committed to publishing employment status guidance to help clarify the existing status boundaries, making it easier for individuals and businesses to understand which employment rights apply to them, enhancing worker protections whilst maintaining flexibility and ensuring a level playing field within the labour market.

"The extension of the ban on exclusivity clauses is welcome. By cutting back on these restrictive clauses, the opportunity to find more flexible work will be open to more people."