Sexual harassment, including online sexual abuse, has become ‘normalised’ for children and young people, a review from Ofsted has found 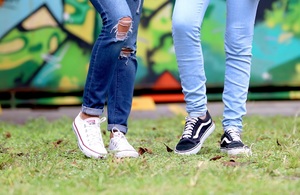 Ofsted’s inspectors visited 32 state and private schools and colleges and spoke to more than 900 children and young people about the prevalence of sexual harassment in their lives and the lives of their peers.

Read Ofsted’s review of sexual abuse in schools and colleges.

Around 9 in 10 of the girls we spoke to said that sexist name calling and being sent unwanted explicit pictures or videos happened ‘a lot’ or ‘sometimes. Inspectors were also told that boys talk about whose ‘nudes’ they have and share them among themselves like a ‘collection game’, typically on platforms like WhatsApp or Snapchat.

We found that children often don’t see the point of challenging or reporting this harmful behaviour because it’s seen as a normal experience. Pupils said adults often don’t realise the prevalence of sexual harassment that occurs both inside and outside school. They spoke of teachers not ‘knowing the reality’ of their lives.

We found that many teachers and leaders consistently underestimate the scale of these problems. They either didn’t identify sexual harassment and sexualised language as significant problems, they didn’t treat them seriously, or they were unaware they were happening. However, school leaders did note that easy access to pornography had set unhealthy expectations of sexual relationships and shaped perceptions of women and girls.

Children told inspectors that they didn’t always want to talk to adults about sexual harassment for a variety of reasons, including concerns about ‘reputational damage’ or being socially ostracised. They also worried about not knowing what would happen next once they reported an incident, and about potential police involvement.

Teaching about relationships and sex

Most children felt that the relationships, sex and health education (RSHE) they received didn’t give them the information and advice they needed to navigate the reality of their lives. Girls were frustrated that there wasn’t clear teaching of what constitutes acceptable and unacceptable behaviour, and many had turned to social media or their peers to educate each other. One female pupil told inspectors, ‘It shouldn’t be our responsibility to educate boys’.

Many teachers said they don’t feel prepared to teach outside their subject specialism, or lack knowledge on topics like consent, healthy relationships and sharing of sexual images. In a few schools, leaders did not value the importance of RSHE. Insufficient time was given to the subject and curriculum planning was very poor.

Local safeguarding partners (LSPs) had varying levels of oversight of the issues for children and young people in their area. Some were working closely with schools to understand children’s experiences. However, a small number told Ofsted that sexual harassment was not a significant problem for schools and colleges in their local area, which isn’t plausible. It was clear that effective joint working between LSPs and all schools and colleges was not happening consistently.

"This review shocked me. It’s alarming that many children and young people, particularly girls, feel they have to accept sexual harassment as part of growing up. Whether it’s happening at school or in their social life, they simply don’t feel it’s worth reporting.

"This is a cultural issue; it’s about attitudes and behaviours becoming normalised, and schools and colleges can’t solve that by themselves. The government needs to look at online bullying and abuse, and the ease with which children can access pornography. But schools and colleges have a key role to play. They can maintain the right culture in their corridors and they can provide RSHE that reflects reality and equips young people with the information they need.

"I hope policymakers, teachers, parents and young people will read the report and work together to change attitudes and put a stop to harmful behaviour. Sexual harassment should never be considered normal and it should have no place in our schools and colleges."

Ofsted’s review makes a number of recommendations for schools, colleges and partner agencies, including:

• School and college leaders should develop a culture where all kinds of sexual harassment are recognised and addressed, including with sanctions when appropriate.

• The RSHE curriculum should be carefully sequenced with time allocated for topics that children and young people find difficult, such as consent and sharing explicit images.

The review also makes recommendations for government, including:

• The government should consider the findings of the review as it develops the Online Safety Bill, in order to strengthen online safeguarding controls for children and young people. It should also develop an online hub where schools can access the most up-to-date safeguarding guidance in one place.

• The government should launch a communications campaign about sexual harassment and online abuse to help change attitudes, including advice for parents and carers.

The review also identifies areas where Ofsted and the Independent Schools Inspectorate can sharpen practice. Safeguarding is well covered on inspection, but a review of past inspections found that they were sometimes not robust enough on sexual harassment. For example, inspectors did not always record how they followed up with school leaders who failed to share any evidence of past incidents of sexual harassment.

Both inspectorates will be making updates to training, inspection handbooks and inspection practices where necessary, in light of the findings.