Speech by Chief of the General Staff, General Sir Mark Carleton-Smith, at the Defence and Security Equipment International event 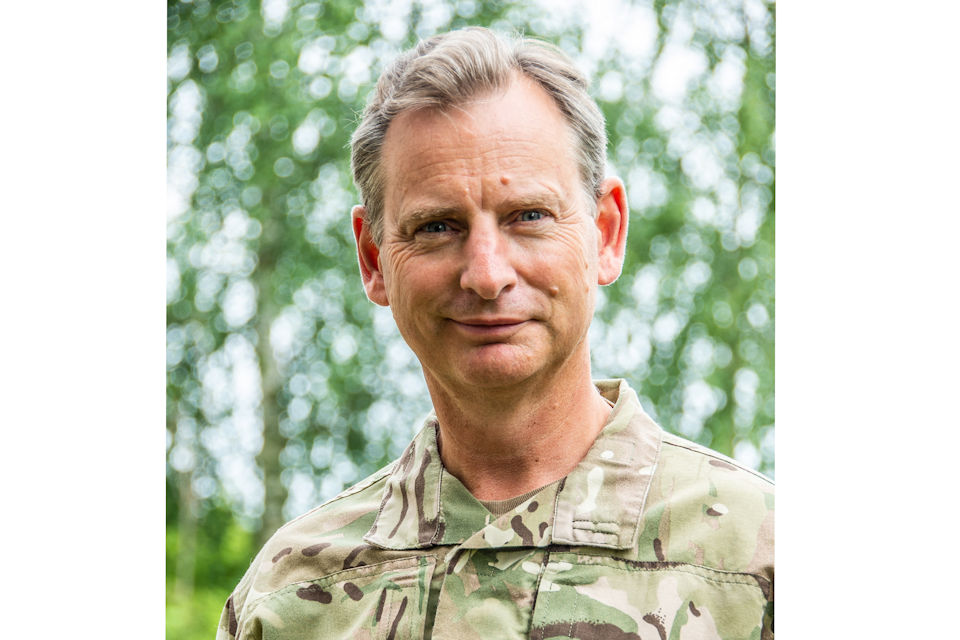 Good afternoon, ladies and gentlemen. I’m delighted to see such a broad audience, and see so many of you actually here in the lecture theatre and those listening in online and more widely across the exhibition hall. I think that I’m not the only one that would reflect that a lot has happened since we were last here in 2019 but it remains the case that no other single event in the calendar so successfully connects the global military community with the cutting-edge technologies of our leading industry partners. And on that basis, thank you to Clarion for bringing us all together. And, quite frankly, it’s good to be back.

And can I encourage you if you haven’t already done so, to visit the British Army-sponsored Land Zone where you have the opportunity to see first-hand the latest innovations from exhibitors and of course to align your businesses with the latest evolution of the British Army.

Because soldiering has always been about evolution, and successful armies have always adapted to the changing context, the changing nature of the threats and emerging technology. And in March of this year, the Integrated Defence and Security Review unveiled it’s latest evolution – it unveiled a blueprint for a digitised and expeditionary Army; an Army modernised to underwrite a modern Global Britain.

And it represents possibly the most significant transformation since mechanisation in the 1930/1940s, mechanisation when we did away with hay-nets and moved to fuel cans, and in so doing accelerating manoeuvre from the speed of the horse to the speed of combustion engine. And I think our transformation from mechanisation to digitisation is possibly going to be even more significant - it’s not just going to accessorise how we do our business; I think it promises to change it completely, whilst at the same time rendering legacy systems obsolete ever more rapidly.

And of course there’s always the odd fly in the ointment. That last great evolution of the British Army – the horse to tank moment – was itself the victim of cultural hurdles and institutional barriers. We came across a War Office memorandum the other day dated 1937. It recorded the then Chief’s view that, ‘the present 1937 would be a most unfortunate moment to disturb an organisation which has valuable traditions and has survived the lean years through which it’s passed’.

And so blitzkrieg came as rather a shock. And it remains a salutary reminder that the job of the Army is to be ready to fight war - and to fight war at its most feral. It’s not the war we last fought, or the war we’d like to fight or the war we anticipate having to fight, but, rather, the war we may simply have no choice but to fight.

And the world today seems no less predictable than it did in that pre-war era - and Covid has exacerbated some of the global underlying morbidities and it’s certainly accelerated some of the wider de-stabilising asymmetries.

Because today’s threats feel very much more hybrid. In my world, they are not only missiles and tanks – dangerous, of course, as they remain – but we’re also living with the consequences of an era of subversion and disinformation, techno-authoritarianism, and economic coercion.

And, in some respects, we’re living with the deliberate weaponisation of those elements of globalisation that hitherto we assumed might keep us both safe and prosperous; I’m talking about free movement of people, of goods, of data and of services.

And we’ve learned, in the context of Covid, that our security also depends on the integrity of our 5G networks and our wider digital infrastructure; It depends on our control and access to pharmaceuticals; we’re reminded that we need to take a view on strategic stockpiling and the necessity to re-shore some of our more sensitive supply chains; and frankly the importance of clean, and reliable, energy in the future. And our security relies just as much on those issues as it does on wider conventional military advantage.

And I think as this cycle of competition heats up, and the pace of change accelerates, the real challenge for us all which is simply to keep up - which means for the Army transitioning from a legacy of equipment and method rooted in the fixed algebra and arithmetic of the Cold War to today’s challenge. And today’s challenge is about regaining the operational advantage and being in a position to exploit technological innovation. Designed to establish a credible asymmetric advantage over our potential adversaries. A potential range of adversaries some of whom appear to have taken a different set of lessons from the history of our own experience of intervention in Iraq and Afghanistan over the last 20 years.

I think the hallmarks of a different form of Land warfare are already apparent – and some small wars – think here Syria, think Libya, and more recently Nagorno-Karabakh – they are already throwing up some quite big influential and interesting lessons.

Highlighting for instance our need to prioritise investment in the Deep Battle – to be able to engage and protect the Force with ever greater precision at greater range. I think the economics of warfare are changing, with real premium today being placed not just on mass, but on a new definition of critical mass; capabilities that are both credible and relevant, that are networked and deployable. And we need to take account of some inescapable realities: an expanding and much more transparent battlespace, effectively one giant sensor; the reality of the increasing range, lethality and precision of weapon systems; the centrality of data to today’s and tomorrow’s world and digital networks; and of course the growing application of remote and autonomous systems.

I am calling this the Army’s ‘Midway Moment’ – Midway was that decisive maritime encounter in the Pacific in the summer of ’42 when the opposing Japanese and American carrier battle fleets never got within 100 miles of each another. And so I think it’s not too early to get a real sense of what’s happening today as artificial intelligence, ubiquitous encryption and sensors, and quantum mechanics transform warfare.

And these lessons reflect a changing character of war and we are changing with it, including taking a significant bet on Tech. Which is why what has emerged from the Review is a sharper, harder and more dangerous Army; it’s a more dynamic and active global posture that leverages our network of overseas training hubs and delivers a more persistent international presence. And that’s going to mean an Army that is more expeditionary and more rapidly deployable, with an emphasis on logistic agility; it’s also an Army that is going to be more digitally connected and networked, and an Army that’s inevitably going to become more specialist. But an Army that when it fights is more lethal, more mobile and much better protected and also one that includes a more specialist partnering capability to operate alongside surrogates and proxies.

The future Ground Manoeuvre force will combine long range surveillance and target acquisition, with ground reconnaissance and electronic warfare, to complement precision strike assets: both rockets, and artillery, in conjunction with attack aviation and armed ISR. Designed to cue a close combat capability built around a new digitised nucleus of warfighting platforms. And the net result is a suite of capabilities optimised for the challenges of the digital age and technically one of the most modernised armies in the world.

We have now signed the contract to upgrade Challenger 3. Boxer is going to revolutionise our operational mobility and we recognise that we’ve got to get Ajax right – because it’s a capability, it’s a gamechanger in our ISTAR and our Manoeuvre capability.

In addition to fielding these platforms, we’re after a more constructive and mutually beneficial relationship with Industry. A Land Industrial Strategy, something the British Army hasn’t had before. But without which our equipment programme has often been poorly prioritised, incoherent and somewhat piecemeal. And of disproportionately low benefit to onshore industrial capability and UK prosperity – certainly by comparison to the Air and Maritime sectors. And we’ll be in the market to contract for capabilities and services - not just platforms and things in the future. Two years ago when we were last here, I explained how we sought to work with Industry to develop the diverse skills and experiences that we collectively needed in order to improve our organisation’s outputs. And we established an External Placement Programme. And whilst Covid paused it, we’ve now just restarted it so I want this afternoon to repeat that as well, and to seek your help to place future senior leaders into your industrial teams. So, if you’re not already sponsoring someone from the Army in your company, perhaps now is that moment to think about doing so.

To better understand and influence our procurement, transformation and indeed to support our R&D and our experimentation priorities. What we today call Prototype Warfare; getting after a combination of synthetics, simulation and a rapid incubation and adoption of cutting-edge defence technologies. And we can’t do this in isolation; it’s clearly much better done in partnership, with you and our international allies.

And we’re going to be greener. Not because we can but actually because we must. Playing our part in helping the UK achieve its goal of net zero carbon emissions by the middle of the century. I’m not saying that warfare is going to be green or an environmentally friendly activity, but what I am saying is that we need a more efficient exploitation of new tech to drive a strong and responsible environmental agenda. And the Army has made a start – we’re opening a number of solar farms this year, the first next month, we’ve planned for upwards of 70. And we’re actively exploring the possibilities and potential application of the electrical revolution that is coming our way and you may hear that referred to as Project Mercury.

Now I think the events of the last 18 months have prompted a timely re-appraisal - strategic shocks tend to focus the mind. And we’ve been reminded of the importance of thinking much more strategically and expansively about the relationship between Defence, Security and Industry. We’re thinking about strategic resilience and the integrity of our strategic base, in a much more volatile world. We’re thinking about the changing nature of systemic competition; the implication of redistribution of global power; and the rapidly evolving strategic landscape is exposing a growing gap as industrial age organisations are confronted by the challenges of the information age.

And for you in industry that’s an opportunity because the British Army is busy recapitalising for the future, and to retain our competitive advantage we need to successfully recast our relationship with you.

And it’s more to my mind than simply an opportunity. It’s actually a responsibility. Because put simply, warfare is a reciprocal relationship, and it happens when the people who stop, think they are going to win, and sometimes, as we all know to our cost, they choose you.

And we may naturally assume that we’re the 20th Century post-war generation.

And I put it to you, what are the implications if we were actually the 21st century pre-war generation? And what are we going to do about that to make sure that we are not. So, thank you all very much for coming.