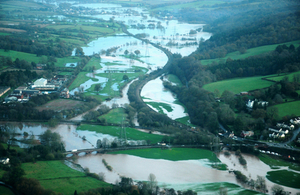 Flooding like this will become more frequent, the Environment Agency has warned, and people should know their risk

The warning follows a pattern of severe flooding over the past 10 years linked to an increase in extreme weather events as the country’s climate changes. Met Office records show that since 1910 there have been 17 record breaking rainfall months or seasons – with 9 of them since 2000. As intense storms are becoming more frequent, sea levels are also rising because of climate change.

The Environment Agency has today launched its Flood Action Campaign, targeting younger people through social media and online advertising to encourage them to check their flood risk at GOV.UK, sign up for free warnings and be prepared to take action when flooding hits. Research shows that 18 to 34 year olds are least likely to perceive flood risk to their area, know how to protect their homes or where to go for information. They are also at highest risk of fatality as they are less likely to perceive their personal risk.

In summer 2012, the lengthy period of drought the country had experienced came to an abrupt end when prolonged and intense rainfall increased the risk of flooding from rivers and surface water for long periods. Almost 8,000 homes and businesses were flooded across the country, particularly in the south west.

The winter of 2013 to 2014 started with a coastal surge and record sea levels on the north and east coasts. This was followed by 12 storms in succession and became the wettest winter for 250 years – 11,000 homes were flooded.

Winter 2015 to 2016 brought widespread flooding to 17,000 properties across the north of England, with named storms Desmond, Eva and Frank causing December 2015 to be the wettest month ever recorded.

The threat of flooding is real and increasing – as is also demonstrated by its listing as one of the nation’s major threats.

Last year, the Met Office published new innovative research which found that for England and Wales there is a 1 in 3 chance of a new monthly rainfall record in at least one region each winter.

By their very nature extreme events are rare and a novel research method was needed to quantify the risk of extreme rainfall within the current climate.

Professor Adam Scaife, who leads this area of research at the Met Office, said:

“The Met Office supercomputer was used to simulate thousands of possible winters, some of them much more extreme than we’ve yet witnessed. This gave many more extreme events than have happened in the real world, helping us work out how severe things could get.”