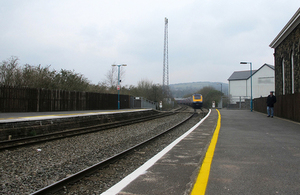 The transfer of rail services to the Welsh government has taken a significant step forward with the laying of a draft order in Parliament.

The draft order was laid before Parliament today (28 February 2018) and will, subject to approval from MPs, Lords and the Privy Council, devolve the procurement and management of Wales and Borders franchise train services within Wales. This follows detailed discussions between the Department for Transport and the Welsh Government on how powers will be devolved to Welsh ministers.

The agreement also takes into account the fact that many of the franchise services operate on both sides of the border between England and Wales and includes safeguards to protect all passengers using these routes.

"This is a positive and significant step in the franchise devolution process and is an example of the effective cooperation between the UK and Welsh governments.

"The devolution of these powers delivers on recommendations made by the Commission on Devolution in Wales and demonstrates the commitment we made as a government in the 2015 St David’s Day Agreement."

"I welcome this recognition of the extensive nature of the cross-border services - and services wholly within England - provided by the Wales and Borders franchise and the need for appropriate accountability for rail operations on each side of the border.

"It will be important for devolution of funding for Network Rail to be delivered in the future and I will continue dialogue with the Department for Transport to that end."

As well as continuing with present franchise funding arrangements, the UK government will also provide an extra £125 million towards upgrading the Valley Lines, part of the Welsh Government’s metro project in South Wales.

The draft Welsh Ministers (Transfer of Functions) (Railways) Order 2018 was laid before Parliament following formal approval by Welsh ministers. It will go before the Commons and Lords for scrutiny.