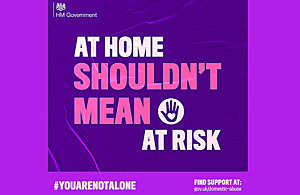 Organisations supporting children affected by domestic abuse have been given a £3 million funding boost.

Today (Tuesday 28 April) the Home Office has announced £3.1 million will go to specialist services for children who have both been directly and indirectly affected by domestic abuse. This can include one-to-one and group counselling sessions to improve the mental health of children affected and early intervention schemes.

It comes as the ground-breaking Domestic Abuse Bill will be debated by MPs at the Bill’s second reading today.

The new funding will be split between local authorities, children’s charities and Police and Crime Commissioners across England and Wales.

"It is unacceptable that some children have to witness appalling abuse carried out in their home by those they should trust the most.

"This funding will go towards supporting these children, healing their emotional scars, and ensuring they can move forwards and have a positive future."

Recipients of the funding include Barnardo’s, Cambridgeshire County Council and the Office of the Police and Crime Commissioner for Northumbria.

"We are delighted that funding for our Opening Closed Doors service will continue for another year. Domestic abuse is an epidemic with devastating effects on children and their families. It leaves families in a state of trauma, with significant impact on their emotional and mental health.

"Sadly the pandemic has seen incidents of domestic violence escalate still further and has highlighted the importance of support for families."

The Domestic Abuse Bill will introduce a wide range of measures to support victims and survivors of domestic abuse as well as ensure perpetrators are punished. Some of the measures included in the Bill include:

In addition to the funding and measures in the Bill, the government has provided additional support to help those at risk of domestic abuse during the coronavirus outbreak.

• domestic abuse and sexual violence victims benefited from a further £600,000 in funding from the Ministry of Justice to support remote based support services

• the Department for Education has made £12 million available to support at risk children impacted by coronavirus, including children affected by domestic abuse

• local government has received £3.2 billion to support those who need support the most, including victims of domestic abuse

• detailed guidance on support available to domestic abuse victims during the pandemic has been published on GOV.UK