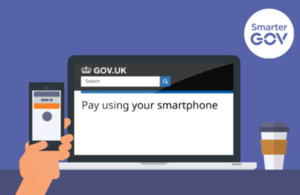 The government launched its online payments platform GOV.UK Pay for services with credit and debit cards in 2016, and so far, more than 2.9 million transactions have been made.

To make the system even easier to use, the Minister for Implementation, Oliver Dowden, has announced that the government will now allow payments to be made with mobile phones through Apple Pay and Google Pay. He said:

"This is another example of how we are working smarter as a government - improving services for people as well as reducing fraud and costs."

An initial trial of four government services being payable through Apple Pay and Google Pay has already been launched.

The services taking part in the initial trial are:

Following the initial trial, it is planned to roll mobile payments across further central government services, and later this year make it available for local government, police and NHS organisations.

As well as being more convenient, these innovative payment types will also be more secure, since they allow the use of fingerprint and facial recognition technology through users’ phones.

"Allowing people to pay for government services through Apple Pay and Google Pay means they won’t have to enter their credit or debit card information when making payments. This innovation will increase the convenience and security of GOV.UK Pay for users and hopefully make their experience online a lot easier."