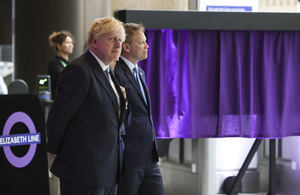 Thousands of commuters across London will see their travel costs reduced by over a third and journey times massively reduced from today (24 May 2022) as the Elizabeth line officially opens to the public.

Thanks to £9 billion of government investment, almost half of the project’s total cost of almost £19 billion (and an additional £2.3 billion in investment from Network Rail), trains on the new line will reduce journey times from Abbey Wood to Paddington from 58 to 29 minutes. They will also cut ticket prices by more than a third, from £6.30 to £4.30 – saving passengers money at a time when costs are rising – while also facilitating economic growth in the long term.

Bringing an estimated £42 billion to the UK economy, the state-of-the-art line will see each train carry up to 1,500 passengers, increasing central London’s rail capacity by 10%, transforming travel across the city and connecting local communities to the centre of London quicker than ever before.

To bring this line to life, more than 55,000 jobs and 1,000 apprenticeships have been created over the past 14 years with over 5,000 of these jobs given to previously unemployed workers. Ninety-six percent of contracts for the project have been awarded to companies within Britain, with 60% of these going to businesses based outside of London – ensuring taxpayer money used to build the line will bring benefits to the entire UK for decades to come.

"As iconic as its namesake, the Elizabeth line is a beacon of British success, not just for this marvel of engineering but for the enormous benefits it brings to the entire nation with £42 billion for the UK economy and 55,000 jobs just 2 of many.

"London’s transport network is its lifeblood and the £9 billion we’ve contributed to make the Elizabeth line a reality is once again testament to our unwavering support for this marvellous city, its inspiring people and the millions of visitors it attracts every year."

All Elizabeth line stations between Paddington and Woolwich provide level access, with all 41 stations eventually being step-free, ensuring that everyone can enjoy cheaper and faster travel across London, as well as the stunning new stations on route.

"By connecting airports, offices, homes, shops and leisure activities more quickly, easily and accessibly, the Elizabeth line will be transformative for Londoners and visitors alike.

"This project is a clear demonstration of what can be achieved when business and all levels of government work together for the good of the national economy.

"With a quarter of carbon emissions coming from transport and the project’s supply chain contracts awarded up and down the country, it is an investment in both a net zero future and levelling up. The Elizabeth line is a project the whole country can be proud of."

This £9 billion investment in the Elizabeth line is the latest example of the government’s commitment to London and the transport network it depends on. The opening follows close to £5 billion of funding given to Transport for London throughout the pandemic to keep vital  transport services running.

This is in addition to over a further billion pounds for each year of last October’s Spending Review and a commitment to explore a long-term funding settlement, all at a time of significant financial pressure for the nation, because investment in UK infrastructure will drive productivity and create jobs – contributing to a high-wage, high-skill economy.

Today’s opening follows a ceremonial opening last week in which Her Majesty The Queen unveiled a plaque at Paddington Station.