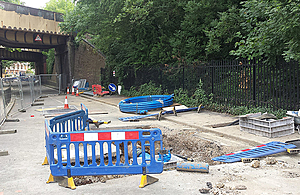 • a further £900,000 will fund scientists, innovators, academics and tech-focused start-ups to research new ways to future proof the UK’s roads

Communities around the country are set to benefit from a £93 million boost to connectivity, ensuring England’s roads are fit for the 21st century.

This includes over £4 million for crucial repairs to the New Elvet Bridge in Durham along with £3.7 million to help refurbish several steel bridges around Northumberland.

This comes as government boosts UK innovators through a £900,000 investment to fund cutting-edge research projects aimed at creating a better transport system – the first of which include world-leading innovations to spot and repair potholes.

"There is nothing more frustrating than a journey delayed by poor road conditions, and this multi-million pound boost will help improve connectivity across the country.

"This investment will not only help local areas to target current pinch points on their roads, but will also harness our world-leading research and innovation capabilities to future proof the next generation of journeys."

One of the projects to receive funding for tech projects will see the development of a new AI-powered app to detect potholes in real-time, using mobile phone sensors to measure when cyclists ride over or swerve to avoid them. It is hoped the app will help local authorities to quickly identify when potholes are forming and take quicker action to fill them.

Another project known as Shape-Pot will create 3D pothole models to create a fully autonomous repair platform capable of automatic, uniform repairs – accelerating the transport network of the future.

Senior Lecturer at the University of Liverpool Paolo Paoletti said:

"The Shape-Pot project has the potential to change the way roads and their defects are managed, promoting a data-driven approach to management and improving efficiency - making roads safer and more accessible.

"Thanks to the T-TRIG funding, the team will create a proof-of-principle autonomous robotic platform to characterise road surface, a first step toward autonomous maintenance of roads."

Today’s announcement is the latest in the government’s drive for a transport revolution, and is part of over £6.6 billion awarded between 2015 and 2021 to improve the condition of the local highway networks.