Recruitment drive to ensure offenders pay back for their crimes 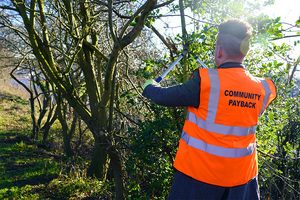 More than 500 extra Community Payback staff are now being recruited to get offenders serving an extra 3 million hours of payback to their communities every year.

The £93 million move will see more focus on outdoor projects, such as picking litter from roadsides and scrubbing graffiti from subways, that help improve the environment and allow the public to see justice being done.

The Deputy Prime Minister, Dominic Raab, visited Birmingham yesterday (13 January 2022) to see offenders improving a popular tow path which will be used by thousands of visitors to this summer’s Birmingham 2022 Commonwealth Games.

The work is the result of a new, national partnership between the Probation Service and Canal & River Trust which sees offenders clearing litter, tidying tow paths and cutting back nettles across some of England and Wales’ 2,000 miles of waterways and canals.

On this one stretch of canal alone, offenders completed more than 15,000 hours of unpaid work along the pathway during 2021. The agreement is the first of a number of new national partnerships set to be agreed between the Probation Service and major organisations this year.

"This extra investment will make sure even more offenders undertake tough, visible work to repay the damage they have caused to society.

"Our new recruits will become part of the unsung army of local champions who are helping tackle anti-social behaviour and making our streets safer by supervising offenders’ engaging in Community Payback schemes."

Applications are now open for over 500 new vacancies in Community Payback roles. The work plays a crucial role in delivering this punishment, improving local communities and steering offenders away from crime.

The Deputy Prime Minister met with the Canal & River Trust’s Chief Executive Richard Parry to see offenders working on a stretch of tow path along a popular route to Alexander Stadium.

"We’re very pleased to be a key partner in the Government’s drive to deliver community improvements by offenders.

"Working alongside Trust colleagues, offenders are learning new skills and improving their prospect of employment, whilst helping to care for our canals and make them attractive places for local people to enjoy."