Liz Truss spoke at Ukraine's Ministry of Foreign Affairs in Kyiv on how nations can work together to make sure that Ukraine, and all of us, are safer in the years to come 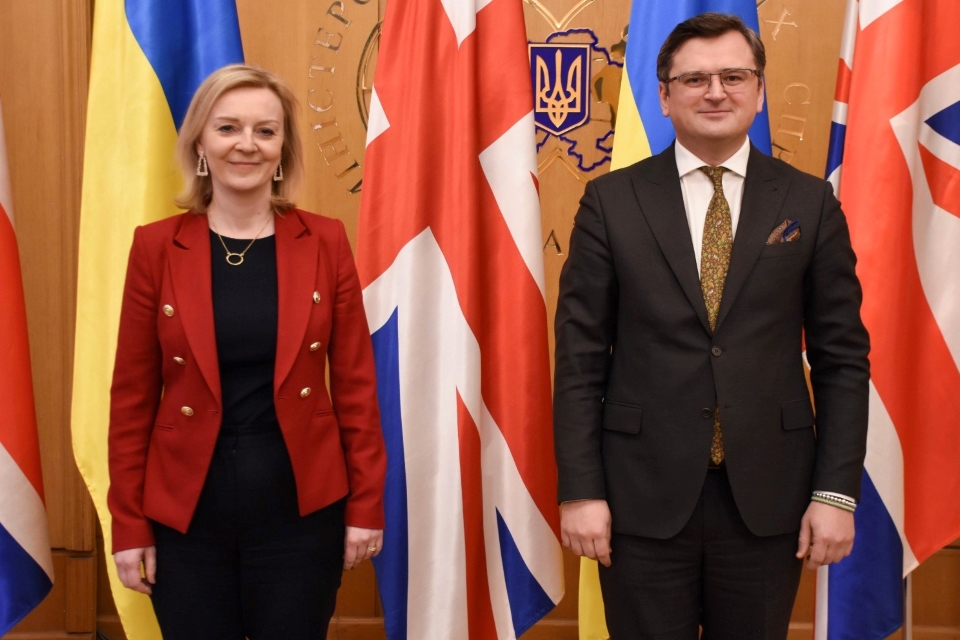 The spectre of Russian aggression has long hung over Eastern Europe. Today it menaces our friends in Ukraine, and threatens security and stability for us all.

We stand shoulder-to-shoulder with Ukraine.

Despite Russia’s claims, the military build-up shows no signs of slowing down. There is currently no evidence that forces are withdrawing.

Russia must step back from the brink.

The Kremlin has had every offer of diplomacy – the Normandy process, proposals for further talks in the NATO-Russia Council, transparency mechanisms through the OSCE, and countless bilateral discussions.

Time after time they have chosen not to engage with these proposals but to obfuscate and object.

When President Putin spoke at the Munich Security Conference 15 years ago, he said that NATO expansion “represents a serious provocation”.

Since then NATO has not expanded its membership closer to Russian territory. But Russia has invaded 2 sovereign states and continues to undermine their territorial integrity.

Russia faces no threat from NATO or Ukraine.

But accommodating illegitimate Russian concerns would not make their threats disappear. Instead, Russia would be emboldened.

Bullies only respond to strength.

I urge Russia to take the path of diplomacy. We are ready to talk. We can talk at the UN as fellow members of the P5, at the OSCE at the Nato-Russia council. Russia can talk bilaterally with the United States as well as with other Nato allies. I say to Russia: now is the time to deescalate and choose diplomacy.

But we are very clear – if they decide to continue down the path of aggression, there will be massive consequences bringing Russia severe economic costs and pariah status.

For years now, Russia has been building its capabilities, violating its commitments and probing our weaknesses.

The West needs to wise up. We need to work together to discredit their arguments in public.

We should use our intelligence strategically to challenge their narrative – as we did last month, exposing the Kremlin’s plans to install a pro-Russian leader in Kyiv and exposing their military build-up on the border.

And we should take on falsehoods – like Russia’s claim that the 2014 Revolution of Dignity was a coup d’état, or when they talk about the “indivisibility of security” as if it means that security is a zero sum game.

Russia argues that increasing one state’s security can only come at the expense of another’s. And with this perverse philosophy they falsely claim that countries on Russia’s borders should not be able to defend themselves or join defensive alliances like NATO.

I challenged Foreign Minister Lavrov on this in Moscow last week.

The commitment to “indivisibility of security” runs through the Helsinki Accords and the OSCE summits in Istanbul and Astana. And it means the precise opposite of what Russia claims. It’s actually a message of mutual dependence – that our security is inseparable – and that a threat to one imperils the security of all.

Russia claims that it’s being threatened. But what is the real threat? It’s not NATO’s defensive alliance. The real threat is the more than 100,000 battle-ready troops massed on the border of this sovereign state.

Russia thinks NATO shouldn’t expand. The truth is that countries want to join NATO. People want insurance and they see safety in numbers. And this is only accelerated by Russia’s belligerence.

Their aggression is driving NATO to strengthen its resolve. It turns the people of Ukraine and others against Russia. And it forces customers of Russian gas to question the reliability of their supplier.

Russia’s aggression is not just targeted at Ukraine.

Their campaign of hybrid warfare across Europe has brought cyber attacks, attempts to undermine elections, and the use of chemical and radiological weapons on the streets of London and Salisbury. They are supporting destabilising mercenaries across Africa.

They have chipped away at the architecture that makes us all more secure. I mean everything from developing missiles in violation of the Intermediate-Range Nuclear Forces Treaty, to breaking the commitments they made to Ukraine in Helsinki, Budapest and Minsk.

And now they have deployed their new generation of intermediate range missiles, which can launch nuclear and conventional warheads.

This is one of the most destabilising developments of the last decade.

We will be strong and we will act together.

And even if Russia pulls back from the Ukrainian border, the problem will have not have gone away.

The free world needs to draw the line under a decade of drift. That means investing in defence and deterrence, and pressing on with NATO’s rapid modernisation.

If we hang back, that would only embolden the bullies in their campaign against sovereignty and the right to self-determination.

This is a litmus test for the West.

We must stand up and defuse Russian aggression now, because if we don’t, it will embolden not only the Kremlin, but aggressors, authoritarians and autocrats right around the world.

And of course, threats exist far beyond the Euro-Atlantic region. Our security is also indivisible from what is going on in Asia-Pacific.

Beijing is increasing its assertiveness and expanding its armed forces at breakneck speed. They are upending the rule of law to create no go areas in the South China Sea, and conducting military flights near Taiwan.

But China is not the same as Russia.

They claim a policy of non-interference. That’s why it’s surprising to see China’s leaders aligning themselves with the Kremlin.

They didn’t object to the 2014 invasion of Crimea. They now talk about who should or shouldn’t be able to join NATO. And last month they joined Russia in resisting a Security Council discussion on Ukraine.

If China wants to be seen as a responsible global actor they should be doing everything possible to ensure that Russia steps back. The world is watching to see whether their actions contribute to peace and stability, or to fuelling aggression.

So how can we deal with this growing questioning of security norms and frameworks?

How can we make sure that Ukraine – and all of us – are safer in the years to come?

I think there are 3 areas that we should focus on.

Firstly, alongside deterrence, we must recommit to arms control.

Much of the architecture we have now arose in the 1990s. It reflects what Mrs Thatcher called “yesterday’s vision of the future.”

In the 21st century we need to take account of new technologies and take a more global approach.

We call on Russia and China to work with us on agreements that will keep our citizens safe.

In the long run, we can’t have a situation where the US is limited to arms control agreements but others can act unconstrained.

We have to strengthen accountability for breaches of agreements, calling out non-compliance – as we have in the abhorrent use of chemical weapons by Russia and Syria.

And we must improve transparency and trust-building measures.

We need to act together on nuclear disarmament, where the UK has long taken a lead.

We made an historic affirmation last month, together with the rest of the P5.

We committed to the Reagan-Gorbachev pledge that a nuclear war could not be won and should not be fought.

We must build on that and put in place concrete measures to reduce the risk of nuclear war. And with that in mind, we must redouble our shared efforts to stop Iran’s nuclear programme.

Secondly, we need to manage those areas where the rules are weakest, or where clashes and escalation are most likely to break out. Namely space, cyber space, the information space and the high seas.

Ukrainians know all too well how damaging cyber attacks and disinformation can be.

That’s why the UK is working with our partners to set standards in these areas – including the use of new technologies.

That’s why we’re leading work in the UN to broker an international consensus on responsible behaviour towards space.

And that’s why we are establishing a new government Information Unit in the UK.

This will be an agile, fully-equipped team tasked with rebutting false narratives and countering the disinformation that malign actors use to target and undermine democratic societies.

We want to see democracies across Europe and beyond stepping up to the plate. We will work more closely with our allies, friends and partners, including the EU.

We want to see NATO accelerate its modernisation and seize the opportunity of the new Strategic Concept to strengthen defence and deterrence.

We are already putting our money where our mouth is as NATO’s biggest defence spender in Europe.

We are joining with our Baltic and Nordic partners in the ground-breaking UK-led Joint Expeditionary Force.

We are providing defensive weapons to Ukraine and have trained 22,000 members of the Ukrainian army.

In dangerous times, we have to take a hard-headed approach.

That includes being ready to accept short-term pain for long-term gain, whether through imposing tough sanctions or cutting strategic dependence by opposing Nord Stream 2.

This is how we will ensure the next 10 years are defined not by danger and drift, but by strength and stability.

We want to live in a world where people are in charge of their own future, free from aggression and coercion, where security is truly indivisible, and where nations respect the sovereignty of others, and live up to their commitments.

That means working together with our friends in Ukraine and beyond to face down malign threats.

It means leading the charge to ensure that the architecture of peace stands the test of time.

And it means making the hard choices to keep our people safe and build a better, more secure future for all of us.

That is our mission. And together we can make that happen.