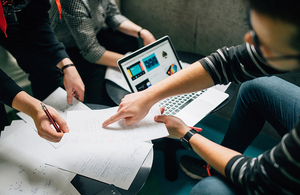 Universities must deliver on plans to improve access and participation for disadvantaged students and put an end to the high rates of students dropping out of courses, the Education Secretary has said today (26 September).

There also remains a stubborn disparity in drop out levels with students from less well-off backgrounds more likely to drop out of university. Data published earlier this year showed that in 2016/17, disadvantaged students were more likely to drop out of university in their first year (8.8% of full-time first degree students under-21) compared to their better off peers (6.0%) – a figure that slightly widened from the previous year.

Ahead of a visit to Kings College London, which offers a range of initiatives to help disadvantaged students, and the publication of new statistics on access and participation by university regulator the Office for Students, Mr Williamson has underlined his determination to take action and ensure every student choosing to go to university – regardless of background – is supported to get the most out of the experience.

Mr Williamson will write to Universities UK to acknowledge the work being done in the sector but to say that more needs to be done to make progress on access and participation at our world-class institutions. He will urge all universities to follow in the footsteps of institutions like Kings College and improve their offer for students from disadvantaged backgrounds.

"I am pleased to see the work that some universities are doing. It was a privilege to address vice-chancellors on this important issue at the recent UUK conference, but disparity remains a problem.

"I want all universities, including the most selective, to do everything they can to help disadvantaged students access a world-class education, but they also need to keep them there and limit the numbers dropping out of courses. My message is clear – up your game and get on with it."

"Progress is being made to ensure that more disadvantaged young people are going to university than ever before, but it’s not enough to get students through the door – they must then get the right support to complete their courses too.

"Dropouts will be a key focus of mine as Universities Minister and I will be watching carefully to see how universities respond to this challenge. I fully support the OfS in taking action if providers fail to do all they can to deliver their commitments."

Mr Williamson’s challenge follows a recent speech he made at the Universities UK annual conference, where he addressed vice-chancellors from across the country, and called for more to be done to ensure wider access to universities for students from all backgrounds.

The latest UCAS figures show that a record rate (21.2%) of disadvantaged English 18-year-olds are starting university this year, up from 19.9% at the same point last year.

The Government’s wide-ranging reforms to higher education has led to the publication of access and participation plans for 41 universities so far. The remaining providers which are required to have plans and have not yet published them will be asked to in due course. The OfS will closely monitor all these providers to make sure they follow through on their plans.

The Education Secretary welcomed the plans set out by universities and wants all institutions to deliver on the commitments they have made, with the support of the ongoing work by the Government in driving up standards and closing the gap between disadvantaged pupils and their peers at school to make sure students are getting the grades they need to go on to university.

Mr Williamson praised Kings College London for blazing the trail through a number of projects to widen participation for under-represented groups, such as the K+ Attainment Raising programme which offers intensive revision sessions for disadvantaged students.

It also partners with charities like IntoUniversity which aims to raise aspirations among young people who may not have thought university was for them, and Parent Power which educates parents about their child’s post-18 choices so they can help them choose the best option for them.