More students from across the globe are choosing to study at UK universities, according to an international study on the world’s best education systems 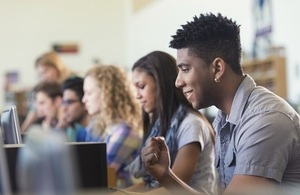 Almost 1 in 5 of all students in tertiary education in the UK are international, with the UK having one of the highest proportions of international students according to the Organisation for Economic Co-operation and Development’s (OECD) annual Education at Glance report –– demonstrating the quality and reputation of our universities and their success as a global export.

The study of education systems in 36 leading countries also found that our schools get more funding per pupil than France, Germany or Japan and the United Kingdom is now among the top three countries for education spending as a proportion of gross domestic product (GDP).

Thanks to the Government’s reforms and the hard work of staff across our education system we are helping to provide a world-class education for everyone. There are now 1.9 million more children in good or outstanding schools since 2010; the results gap between disadvantaged pupils and their peers has shrunk by 10% since 2011; England has risen to joint 8th in the world’s primary-level reading league table; GCSEs have been reformed to match the best performing education systems in the world; and A Levels now ensure students have the knowledge and skills they need, creating qualifications parents, universities and employers can trust.

Today’s publication from the OECD contains a number of findings which show even more progress, including:

• Teachers – Teachers with 15 years’ experience not only earn more than the OECD average, but also more than their counterparts in European education systems, such as France, Italy and Sweden. This follows the recent announcement of a 3.5% pay increase for classroom teachers, funded by a £500 million Government grant, in addition to the tax-free bursaries worth up to £26,000 for trainee teachers in priority subjects.

• Higher education – The OECD found that the United Kingdom offers some of the most generous financial support for students. The Government has also taken steps to make the system better for graduates, including by increasing the repayment threshold, saving them up to £360 a year, and a record proportion of disadvantaged 18-year-olds accepted a place at university on A Level results day earlier this year.

• Lifelong learning – The UK has one of the highest enrolment rates of adults over 40 in education, and an above average percentage of students over 20 in vocational programmes.

• Early years – The UK has almost universal enrolment in early education at ages 3 and 4. This builds on more than 1.3 million children in England benefiting from some form of government funded early education, with more than 340,000 benefitting from our 30 hours free childcare offer, and 93% of childcare settings rated good or outstanding.

• Autonomy – Nearly two third of decisions are taken at school level in the UK meaning that, unlike the majority of other countries, schools have flexibility over timetables, as well as personnel and resource management.

• Opportunities – The percentage of young adults not in education, employment or training continues to fall. It is currently at the lowest level ever among 16- to 18-year-olds.

"I have been clear that I want to see a world class education for every child, whatever their background and this OECD study showing the great progress we have made in our efforts, highlighting the many strengths of our education system.

"Since 2010 there are 1.9 million more children taught in good or outstanding schools, the attainment gap between rich and poor has shrunk by 10% and we have reformed qualifications to make them something parents, universities and employers can trust.

"The result of this is that, as the report recognises, we have high levels of young people in education or employment, the financial gains from going to university outstrip the cost and people are more likely to continue learning throughout their lives."

The Government is continuing to invest in education in order to drive up standards even further. By 2020, school funding will rise to a record £43.5 billion, which is 50% more in real terms per pupil than it was in 2000 and by the end of the decade we will have created one million more school places since 2010 – the fastest increase for two generations. This is backed by £23 billion by 2021 to ensure every child has access to a good school place and means the average primary class size is 27.1 and the average secondary class is 21.2.

The Education Secretary has also made it a key priority to deliver a world-class technical education system, creating new T Level qualifications that will be available from 2020 and backed by an additional £500 million a year once the programme is fully rolled out. This builds on the 3.7 million apprenticeship starts since 2010, giving more people the skills they need for employment, to get on in life and strengthen the UK economy.

The report today proves that education continues to be one of the country’s best exports, with ministers travelling across the world – from China to Jordan to Argentina – to share England’s successes and learn from the best systems. Last week the Education Secretary visited Ireland to learn more about how they teach children to read, resulting in a strong performance in the international literacy league table. This follows England’s rise in last year’s PIRLS study.