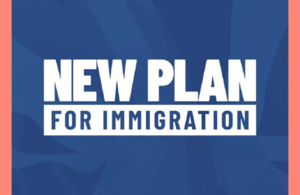 Those who enter the UK illegally will find it harder to stay under fundamental reforms in the Nationality and Borders Bill entering Parliament today (Tuesday 6 July 2021).

The government’s fair but firm New Plan for Immigration, first published in March 2021, set out the most radical changes to the broken asylum system in decades.

It will prioritise those in most need of protection while stopping the abuse of the system.

"For too long, our broken asylum system has lined the pockets of the vile criminal gangs who cheat the system. This isn’t fair to the vulnerable people who need protection or the British public who pay for it. It’s time to act.

"This legislation delivers on what the British people have voted for time and time again - for the UK to take full control of its borders. It paves the way for a fair but firm system that will break the business model of the gangs that facilitate dangerous and illegal journeys to the UK while speeding up the removal of those with no right to be here."

"Our reforms will ensure that immigration appeals are heard fairly but not repeatedly – resolving cases more quickly and reducing the burden on our legal system.

"All too often judges are asked to review cases that have already been rejected on multiple occasions and stand zero chance of being overturned. These clog the system at taxpayers’ expense, delay the removal of people who have no legal right to be in the country, and cause misery to those with legitimate claims awaiting resolution."

The government has already ended freedom of movement with the EU and introduced a points-based immigration system to welcome the brightest and the best from around the world. The Nationality and Borders Bill now tackles the challenge of illegal immigration.

The bill will make it a criminal offence to knowingly arrive in the UK without permission to be here, sending a clear message to migrants thinking about making the dangerous and illegal journey.

Other measures among the wide range of changes to overhaul the system include:

• making every effort to remove those who enter the UK illegally having travelled through a safe country in which they could and should have claimed asylum; only where this is not possible, those who have successful claims, having entered illegally, will receive a new temporary protection status rather than an automatic right to settle and will be regularly reassessed for removal from the UK - people entering illegally will also have limited family reunion rights and limited access to benefits

• increasing the punishment for people smugglers who facilitate illegal entry to the UK, who will face up to life imprisonment

• a new and expanded one-stop process to ensure that asylum, human rights claims and any other protection matters are made and considered together

An ambitious range of other changes will take place in addition to this bill, including:

• strengthening the safe and legal ways in which people can enter the UK, including through the new UK Resettlement Scheme which started in February 2021

• granting resettled refugees indefinite leave to remain when they get to the UK, so they have certainty and stability to rebuild their lives, and helping them to learn English, get a job and thrive