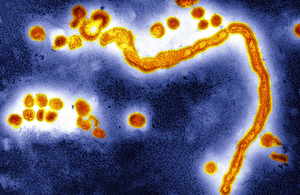 The Chief Medical Officer is among a group of leading doctors and nurses who have written to NHS staff urging them to get vaccinated as soon as possible to help reduce the spread of flu.

The letter reminds healthcare workers of the key role they play ‘in protecting the health of the public’. It states their ‘shared professional responsibility’ to protect patients.

Across the NHS, 59% of staff have had the vaccine but in some Trusts less than 3 in 10 staff are protected.

"Flu can kill and it is important we all take it seriously.

"The best way to protect yourself and those around you is to get the flu jab. If you are suffering from flu-like symptoms you should catch your coughs or sneezes in tissues, bin the tissue immediately, and wash your hands regularly with soap and warm water."

"The recent flu figures are a reminder that NHS staff should protect themselves, patients and their loved ones by getting vaccinated. We should have a measured debate about making this the norm for doctors, nurses and other frontline NHS staff before next winter."