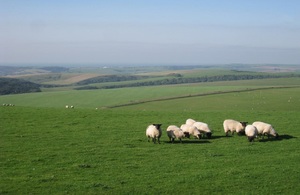 Environment Secretary George Eustice set out his vision for farming today, pointing out the importance of the food industry to the Government’s levelling-up agenda. He outlined opportunities to enhance profitable agricultural production and increase food security, alongside delivering on environmental priorities to tackle biodiversity loss and climate change.

Speaking at the Country Land and Business Association conference, he said:

"There is a food manufacturer in every parliamentary constituency in the UK – except Westminster. These manufacturers provide employment opportunities in areas where there might otherwise be deprivation. They offer opportunities to apprentices; they invest in research and development and they give local areas a sense of pride and identity."

Emphasising the role of domestic food production in food security, he highlighted the fact that the sectors where we have greatest self-sufficiency in food production tend to be those that have not traditionally been subsidised and he highlighted how encouraging techniques such as regenerative agriculture can reduce costs and improve profit margins as well as helping the environment.

The Environment Secretary also shared further details of the Sustainable Farming Incentive – the first of the new environmental land management schemes – which will be rolled out next year. Crucially, farmers will be free to choose the elements of the scheme that work for them.

Farmers will receive payment for taking actions which generate environmental benefits, such as improving grasslands or soils. With nearly 1,000 farmers signed up to the pilot, the new scheme will now be rolled out to farmers who farm more than 5 hectares of land and are eligible for the Basic Payment Scheme next year.

Setting out his priorities for the scheme, Eustice said:

"While it is not for me to tell an individual farmer what to do, I accept that we need to be clear about the policy outcomes we seek. These are to halt the decline in species abundance by 2030; to reduce our greenhouse gas emissions; to plant up to 10,000 hectares of trees per year in England, to improve water quality; to create more space for nature in the farmed landscape; and to ensure that we have a vibrant and profitable food and farming industry which supports the Government’s levelling-up agenda and helps safeguard our food security."

The Environment Secretary also announced that farmers would be able to access funding for an annual health and welfare visit – a fully funded vet visit once a year which can help to reduce endemic diseases and conditions within livestock – providing further financial support and helping to raise animal welfare standards even further.

The Sustainable Farming Incentive will bring together a wide range of actions that farmers can take to deliver improved outcomes for the environment into a set of universal standards. Initially, farmers will be able to select from three standards – Arable and Horticultural Soils, Improved Grassland Soils, and Moorland and Rough Grazing.

The Arable and Horticultural Soils standard offers between £22 - £40 per hectare and includes activities such as testing of soil organic matter.

The Improved Grassland Soils standard offers between £28 - £58 per hectare for activity including producing a soil management plan or herbal leys on at least 15% of land.

The Moorland and Rough Grazing standard offers £148 fixed per agreement per year, plus an additional variable payment rate of £6.45 per hectare.

Farmers will be able to access up to £58 per hectare for improving soils from next year. As the rollout progresses, the government will include further standards to deliver wider environmental outcomes, such as improving hedgerows and combining trees or shrubs with crop and livestock farming.

"Today is a major milestone in the development of England’s new agriculture policy. The Environmental Land Management schemes have the potential to be the most progressive and environmentally responsible schemes of their kind anywhere in the world.

"The detail announced today of the Sustainable Farming Incentive, a key pillar of ELM, fires the starting gun on our transition towards a more sustainable and resilient farming sector, that will feed the nation as well as deliver further environmental benefit."

Today’s announcements are a further step in delivering England’s new agricultural policy, which the government has been working with farmers on to co-design the new system and support the choices they make for their own holdings. Since January, the government has:

• launched the Farming in Protected Landscapes scheme which provides funding to farmers and land managers in Areas of Outstanding Natural Beauty (AONB), National Parks and the Broads to make improvements to the natural environment, cultural heritage and public access on their land;

• consulted on a voluntary exit scheme which builds on evidence that some farmers would like to leave the industry but have found it difficult to do so for financial reasons. The Government proposes to offer them a lump sum payment to help them do this in a planned and managed way;

• launched the Farming Investment Fund to boost farm profitability – farmers will benefit from a £27 million pot to invest in productivity-boosting equipment; and

• launched the Future Farming Resilience Fund which is designed to provide business support to farmers and land managers during the early years of the agricultural transition.

Further details on the Sustainable Farming Incentive are available here.

Information on the Landscape Recovery and the Local Nature Recovery schemes – the other two new environmental land management schemes which will complement the SFI – will be provided in the new year.